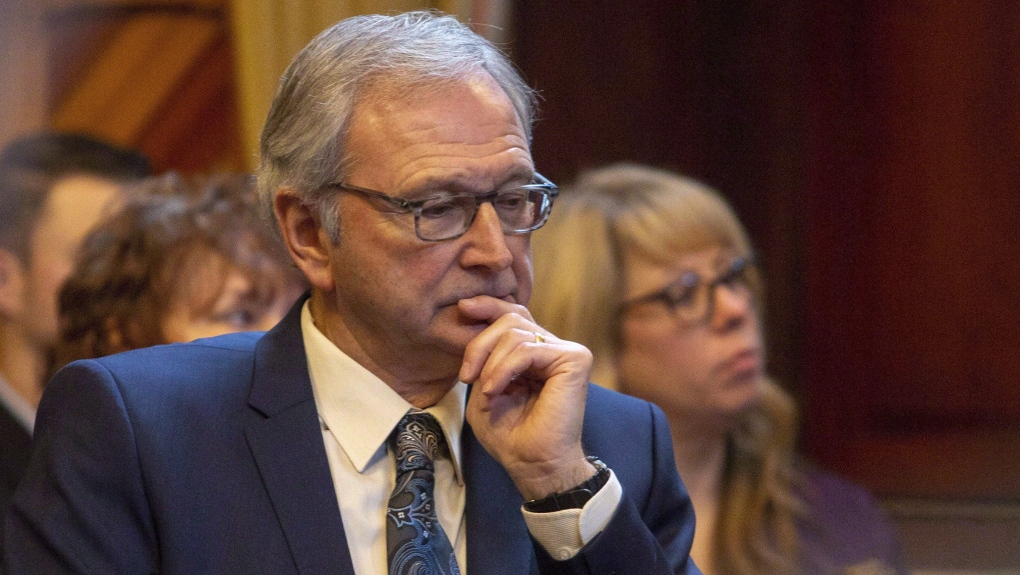 FREDERICTON -- New Brunswick Premier Blaine Higgs says his government will change regulations to allow limited shale gas development -- and could have it done before the end of the year.

The Tories' throne speech passed 25-23 in the legislature Friday, a crucial victory on a confidence vote for the minority government.

It included a subamendment that urges government to allow limited natural gas development -- if the regulations are changed, the Sussex, N.B., area would be the only location east of Ontario where fracking would be allowed.

Saint John Harbour Liberal MLA Gerry Lowe voted with the Tories and the People's Alliance parties to support the fracking subamendment, but later voted with his party and the three Green members in opposition of the throne speech.

"If there's enough gas in Sussex and we can get gas through it and reverse it, then I hope there's more taxes coming for the city," he said.

"I told the caucus a week ago what I was going to do and today nobody gave me the finger. So they're still my friends, I guess," Lowe said.

Higgs said the vote gives him the ability to amend the province's fracking moratorium.

"No further vote (needed) at this time, because we had a vote that accepted doing the shale gas fracturing in the region that we're focused on," Higgs told reporters.

There was originally no mention of shale gas or fracking in the throne speech, but Higgs said when the Liberals introduced an amendment to maintain a moratorium imposed in 2014, the Tories had to respond with the subamendment -- which was passed.

"We amended it to reflect what I would have brought forward in legislation, that it is going to be this area. We've already identified that. We already voted on that. Right now it's not my intention to bring anything more forward in that regard," Higgs said.

He said cabinet can change the regulations concerning the moratorium, and that could happen before the end of the year.

Opponents have raised concerns that shale gas development in the Sussex area could extend into neighbouring Albert County and possibly affect the city of Moncton's watershed.

"The air pollution, the water pollution and the climate change gasses that escape from that don't follow political lines on a map. They are going to go where the air and water goes, and of course climate change affects the whole planet," said Jim Emberger, spokesman for the New Brunswick Anti-Shale Gas Alliance.

Higgs said the boundaries have yet to be determined, but it's one of the items he wants to discuss when he meets with Steve Moran, the president of fracking proponent Corridor Resources, next week.

"We are grateful for the support of the government and the legislature for the thoughtful approach to removing the moratorium in respect of hydraulic fracking. We look forward to a constructive and collaborative relationship in the months ahead," Moran wrote.

Corridor Resources currently has 32 producing wells in the Sussex area and operates a 50 kilometre pipeline, a gathering system comprising 15 kilometres of pipe, and a natural gas processing facility.

In a corporate presentation released this month, the company said if the moratorium is lifted, they would drill five vertical evaluation wells, complete three existing wells, identify "sweet spots," and drill a second round of up to five horizontal wells.

Environmentalists have raised concerns about fracking for shale gas which involves pumping water and chemicals under pressure deep underground to fracture layers of shale rock and release pockets of gas.

Lois Corbett, executive director of the Conservation Council of New Brunswick, says the government should be looking to end fossil fuel development.

"We need to figure out regionally, community by community, and provincially how to have a safe exit from the fossil fuel era in order to deal with climate change," she said.

Corbett said despite what the government is saying, she believes the majority of the people in the Sussex area are opposed to shale gas development and fracking.

The Tories took power this month after the Liberals were defeated in the confidence vote on their throne speech following the September election.