An iconic Heritage Minute about basketball and peach baskets may be seared into the minds of Canadians, but a New Brunswick town is looking to cement its own status within one of the biggest sports on Earth.

St. Stephen has been building its case for several years as being home to the world’s oldest existing basketball court.

A committee is now ramping up its fundraising efforts to commemorate the first game played on the court inside the town’s former YMCA on Oct. 17, 1893.

As the story goes, Nova Scotia’s Lyman Walker Archibald was one of several apprentices of basketball’s founder and fellow Canadian James Naismith.

Under Naismith’s direction, Archibald learned the game in Massachusetts and participated in the world’s very first basketball game. He would soon be one of several players in that inaugural game who would span out to introduce the sport across Canada.

Archibald became the recreational director at St. Stephen’s YMCA, and organized a game on a hardwood floor inside the top floor of a brick building in downtown St. Stephen.

Archivists have cited a local newspaper article from that period to confirm when that game was played.

And then, it was seemingly all forgotten.

'HIDDEN SECRET IN THE COMMUNITY'

Time went by, the sport of basketball went worldwide, and the humble brick building on St. Stephen’s King Street went through its own evolution.

The local YMCA left, and new entities came and went, including a barbershop, printing press, pharmacy -- believed to be New Brunswick’s first -- and thrift store. All the while, the setting for the world’s oldest basketball court remained intact and uncelebrated.

Then, there was a fire. 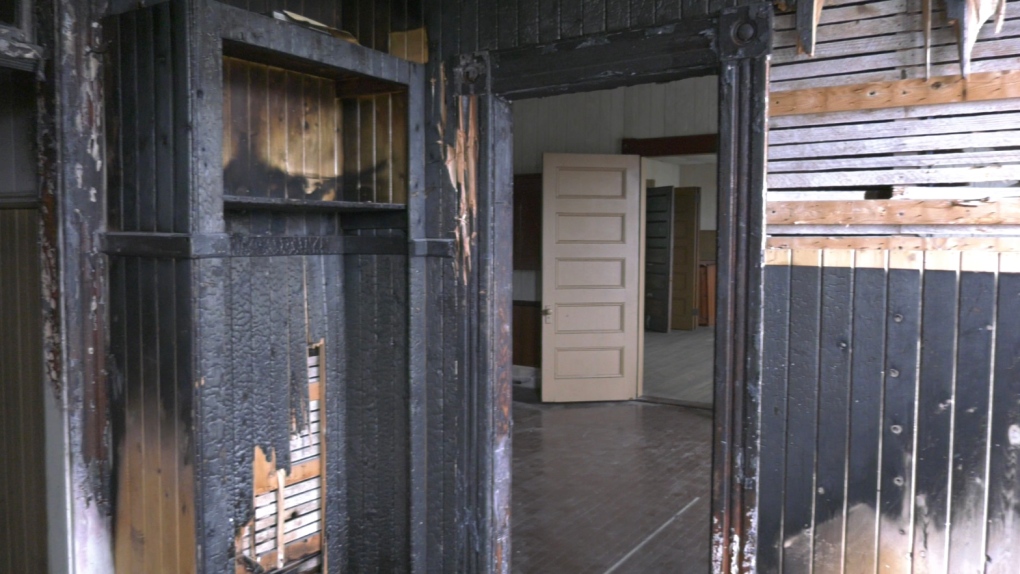 Damage from the 2010 fire remains and may become part of an exhibit inside the location. (Nick Moore/CTV Atlantic)

The 2010 incident caused damage uncomfortably close to the court, but it was largely left unscathed by the smoke and flames. A carpet was removed during the cleanup, revealing the basketball court’s original hardwood floor.

It’s then when the location’s backstory emerged front and centre.

“I was sitting in the council chambers just after the fire and was told we have the oldest basketball court in the world,” said St. Stephen Mayor Allan MacEachern.

“And I still remember my hair standing up and thinking ‘What do you mean we have the oldest basketball court? Why are we just talking about this?’

“It was a hidden secret in the community.”

It was the tip-off many needed to take a second shot at true commemoration. Some fresh coats of green and blue paint have been added, and a peach basket was appropriately attached to the wall. But there’s still more to be done.

'IT CAN BE A HUGE TOURIST ATTRACTION'

To date, several steps have been taken to proceed with preservation, including an architectural inspection. The building was also purchased by the municipality. Now, a new fundraising effort is getting set for a giant leap.

“As far as local fundraising, this is the first big initiative,” said Dave Fraser, a member of the organizing committee.

An event on June 25 will offer a dinner, live music, a silent auction, and court tours, with all proceeds going toward the location’s continuing restoration.

Fulton predicts it will take about three to four years for the site to have its public grand opening, which will feature exhibits and artifacts not only highlighting the area’s local basketball roots, but the sport’s strong ties throughout Canada.

For example, the very first league game for what would become the NBA was played in Canada on Nov. 1, 1946. Fulton said success of the Toronto Raptors has also done wonders to energize basketball’s growth across the country.

Damage from the 2010 fire may also be included as an homage to how the court's story was rediscovered.

The total cost of the St. Stephen project is expected to land somewhere around $10 million.

Police in Halifax say they made an unspecified number of arrests during a massive street party involving thousands of people near Dalhousie University.

Police firing tear gas after an Indonesian soccer match in an attempt to stop violence triggered a disastrous crush of fans making a panicked, chaotic run for the exits, leaving at least 125 people dead, most of them trampled upon or suffocated.

Laughter lights up the gathering twilight at Langara College in Vancouver, where first-year health science student Jagiit Singh is chatting with friends next to the school's fountain. But his smile fades when he's asked about the cost of living in Canada since moving from India last year.