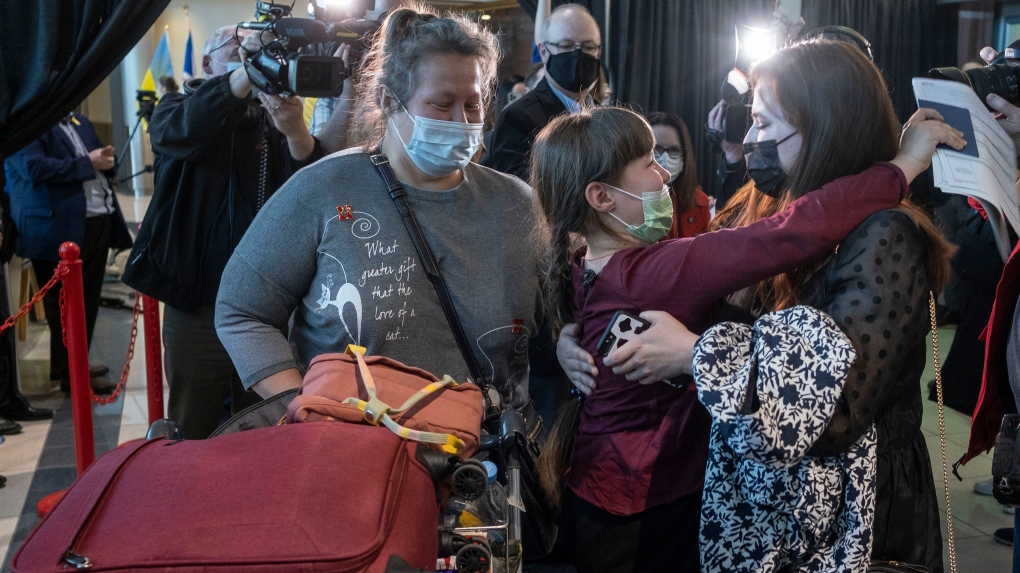 Nine-year-old Zoriana, middle, greets her sister, Sofiia, as her and their mother, Natalia, arrive from Ukraine in St. John's, Monday, May 9, 2022. THE CANADIAN PRESS/Greg Locke
ST. JOHN'S, N.L. -

Newfoundland and Labrador is offering provincial driver's licences to Ukrainian refugees, but not to refugees from other countries like Syria or Afghanistan -- and experts say the exclusion should stop.

Hassan Ahmad is an assistant law professor at the University of Ottawa who brought a case to the Human Rights Tribunal of Ontario that ended that province's selective licensing for refugees. He said denying provincial licences to refugees from certain countries can deny them a chance to succeed in their new home.

"The ability to have independence in their driving, but also the ability to seek out certain jobs, is essentially prohibited for refugees who can't get the exemption that Ukrainians have gotten," Ahmad said in an interview Friday.

The Newfoundland and Labrador government announced Friday that newly arrived Ukrainians holding a passenger vehicle or light truck driver's licence in their home country will be able to exchange it for a licence from the province. They will not have to take a driver's test to qualify.

The government says it will also provide letters confirming Ukrainian driving histories, which can be presented to insurance companies to obtain rates comparable to those for Newfoundland and Labrador drivers with similar experience.

The announcement comes as a second government-chartered plane is set to land in St. John's June 14 carrying what is expected to be more than 150 Ukrainians fleeing Russian attacks on their homeland. The first plane arrived May 9, carrying 166 people.

Newfoundland and Labrador welcomed more than 100 refugees from Afghanistan last October, but they do not qualify for provincial driver's licences.

"Officials assessed the licensing equivalency of the other three most frequent countries of origin for refugees in the province over the last five years: Afghanistan, Syria and Eritrea," Krista Dalton, a spokeswoman for the Digital Government Department, said in an email Friday. "Unfortunately, the requirements were not found to be equivalent."

Ahmad, who has lived in Syria, said that reasoning can be challenged in multiple ways. He said a Ukrainian who has had a licence for five years but mostly takes the bus would qualify for a licence over an Afghan who drove the busy streets of Kabul every day.

"How do you know what kind of driving experience people had in their country?" Ahmad asked. "If you kind of just think of through, it doesn't hold up and you get into the issues of, is there bias there based on subjective factors, as opposed to any kind of objective evidence?"

Due to the case he brought last summer before the Human Rights Tribunal of Ontario, that province now offers a full Class G Ontario licence to all refugees with a licence from their home country if they sign an affidavit swearing to their driving history of at least two years, and pass the provincial driving test, Ahmad said.

Tony Fang, an economics professor at Memorial University who studies newcomers' experiences in Newfoundland and Labrador, says the province needs to treat newcomers from all countries equally and offer them the same services and benefits.

Newfoundland and Labrador needs immigrants, he said -- until recently, the province's rapidly aging population of roughly 521,500 people had been dwindling. The government hopes to welcome 5,100 newcomers each year by 2026.

In a province so sparsely populated, transportation can be a make-or-break issue for newcomers, Fang said. Ukrainian refugees have reported insurance companies asking for over $5,000 a year for auto insurance, and Fang said refugees from Syria, Eritrea and Afghanistan are asked for just as much. They deserve the same opportunities to have those rates lowered, he said.

"We need to have an equal playing field for all immigrants and refugees," Fang said.

The high-profile efforts to resettle Ukrainians provide an opportunity for the provincial government to re-examine its immigration and settlement services to be sure they truly serve everyone, he said.

This report by The Canadian Press was first published June 10, 2022.

The beginning of February is expected bring Arctic-like temperatures across much of Eastern Canada, thanks to frigid air from the polar vortex. The cold snap will descend on Eastern Canada this week, with temperatures becoming seasonable again on Sunday. In between, much of Ontario, Quebec and Atlantic Canada can expect the coldest days yet this winter.