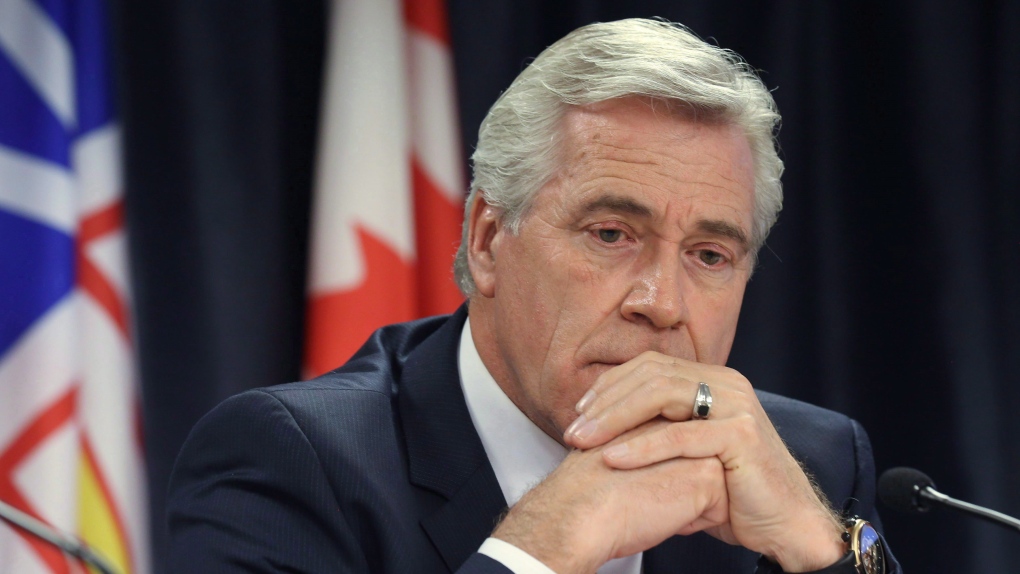 Newfoundland Premier Dwight Ball announces the terms of reference for the judicial inquiry into the Muskrat Falls hydroelectric project at the Confederation Building in St. John's on November 20, 2017. THE CANADIAN PRESS/Paul Daly

ST. JOHN'S, N.L. -- Ottawa and Newfoundland and Labrador say they will rewrite the financial structure of the Muskrat Falls hydro project to shield ratepayers from paying for the megadam's cost overruns.

Federal Natural Resources Minister Seamus O'Regan and Premier Dwight Ball announced Monday that their two governments would scrap the financial structure agreed upon in past federal-provincial loan agreements, moving to a model that redirects benefits to ratepayers.

Both politicians called the announcement, which was light on dollar figures, a major milestone in easing residents' fears that electricity rates will spike sharply when the over-budget dam comes fully online next year.

"We are in a far better place today thanks to this comprehensive plan," Ball said.

Ball has said the issue of electricity rates is a top priority for his government, and he has pledged to keep rates near existing levels, but talks with Ottawa have dragged on since April.

A report by the province's Public Utilities Board released Friday forecast an "unprecedented" 75 per cent increase in average domestic rates for island residents in 2021 and reported concerns from industrial customers about their ability to remain competitive.

Costs of the Muskrat Falls megadam on Labrador's Lower Churchill River have ballooned to more than $12.7 billion since the project was approved in 2012, according to the latest estimate of Crown corporation Nalcor Energy.

The dam is set to produce more power than the province can sell. Its existing financial structure would have left electricity ratepayers on the hook to make up the difference starting in 2021, an issue both governments said Monday has been resolved with the relaunch of financing talks.

"Essentially, you won't pay this on your monthly light bills," Ball said.

But details of how the project will meet financing requirements in coming decades to make up the gap in funds are still to be worked out.

Both Ball and O'Regan criticized previous governments for sanctioning the poorly planned development and again pledged their commitment to easing the burden on residents.

"We promised we would be there to help, and we will be," O'Regan said before announcing a "relaunch" of negotiations around the project's financial structure.

He did not say how much the new setup might cost the federal government, stressing that the new focus will be on the project's long-term sustainability. "There's no single piece of policy ... that can resolve such a large and complicated mess," O'Regan said.

The two governments also said they will work towards electrifying federal buildings to reduce an anticipated power surplus in the province.

In the short term, the federal government said it would allow for "flexibility" in upcoming cash requirements related to debt servicing, allowing deferral of payments if necessary.

Ball said that flexibility was built in to ensure the plan would still be applicable if costs continue to rise before Muskrat Falls is commissioned.

"What I heard talked about was an agreement that in the future, there's going to be an agreement," said Progressive Conservative Leader Ches Crosbie. "This was an occasion to reassure people that there's a plan in place to make life here affordable, and I didn't see that happen today."

Others addressed the lingering questions about the project's final cost.

Nalcor's latest estimate has remained unchanged since 2017, though the Muskrat Falls project has seen additional delays related to staffing and software issues.

Dennis Browne, the province's consumer advocate, said the switch to a cost of service model is a significant move that will benefit ratepayers, but he said it's impossible to truly restructure the project while it's a work in progress. "We need to know what the figures are, and we don't have them," he said.

This report by The Canadian Press was first published Feb. 10, 2020.