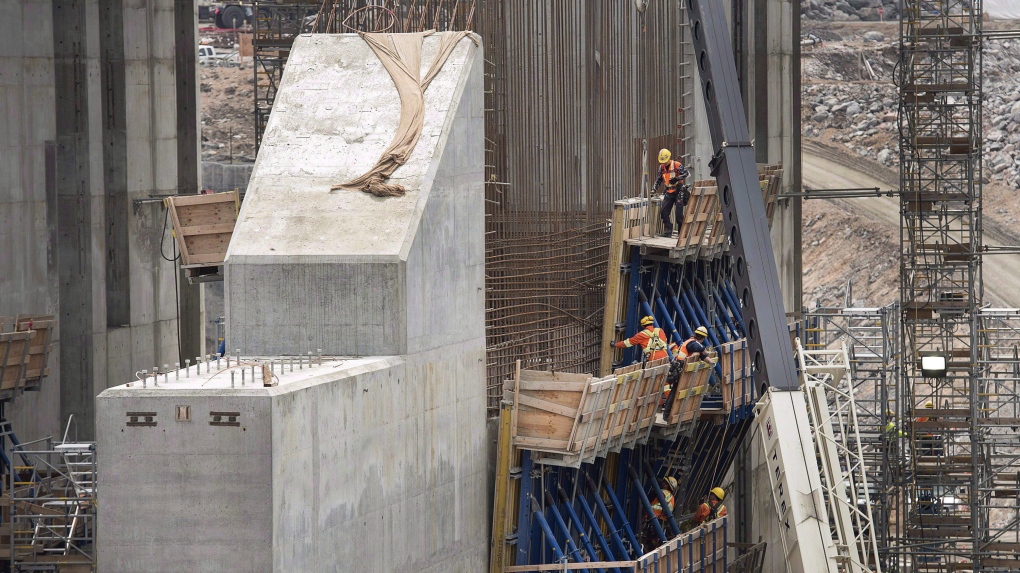 The construction site of the hydroelectric facility at Muskrat Falls, Newfoundland and Labrador is seen on Tuesday, July 14, 2015. (THE CANADIAN PRESS/Andrew Vaughan)

The work, known as "capping," was meant to reduce the risk of toxic methylmercury produced by the flooding seeping into the food chain downstream from the reservoir, potentially affecting crucial food sources for Inuit residents.

Liberal Premier Dwight Ball said he wanted the work to happen, but a necessary work permit was not approved before it was too late to keep the project from falling further behind schedule.

The gaffe was revealed this summer at the inquiry into the controversial hydroelectric project in Labrador -- leading the inquiry's commissioner to say it was "confounding" that the work had slipped through the cracks.

Four of seven seats on the committee are held by members of the Liberal government, but Crosbie urged them to put partisan concerns aside in pursuit of public accountability.

"The taxpayers of the province have a right to know, and the Indigenous people who were party to the breached agreement with the province have a vested interest in knowing exactly what happened," Crosbie wrote in a letter to the committee dated Tuesday.

Ball announced on July 23 that the $30 million set aside for wetland capping would instead be offered to three Indigenous governments in Labrador for "social and health benefits."

The Innu Nation and NunatuKavut Community Council have accepted $10 million each in an agreement with Crown corporation Nalcor Energy, which is overseeing the hydro project.

The Nunatsiavut Inuit government has not accepted the money, which the organization's president Johannes Lampe calls "hush money."

Lampe said the situation downstream from Muskrat Falls is now a "ticking time bomb" and criticized the premier for betraying the trust of Labrador's Inuit.

"We are now at a point of no return where the health, culture and way of life of many Labrador Inuit hangs in the balance," Lampe wrote in an Aug. 8 statement.