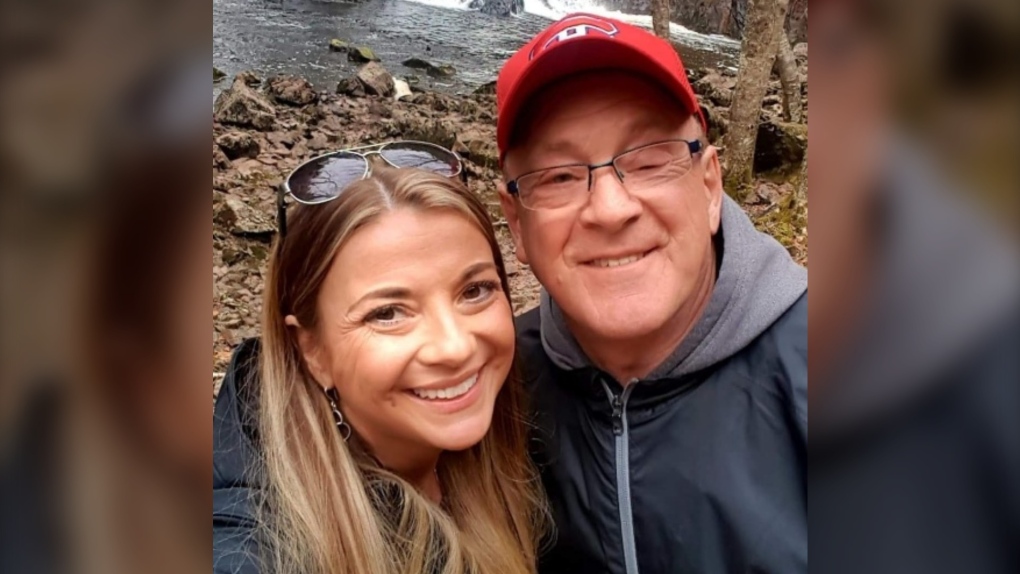 Kelly Marshall, left, and her father Rick Cameron pose for a selfie at a waterfall in Nova Scotia in an undated handout photo. As Rick Cameron rests and rehabilitates his body from its war with COVID-19, he has a story to read through to fill in the gaps of his journey. (Submitted: Kelly Marshall)

HALIFAX -- As Rick Cameron rests and rehabilitates his body from its war with COVID-19, he has a story to read through to fill in the gaps of his journey.

It is the detailed documenting of his struggle to survive as he lay deeply sedated in a Truro, N.S., hospital, kept alive by a ventilator.

The online blog compiled by his daughter includes moments of despair, of joy, of songs sung through smartphones to a semi-conscious man, and of a family's love for a "Papa bear" lying in a state of weakness.

Most days during Cameron's seven weeks in hospital, Kelly Marshall and her family would post in "Rick Cameron: His road to recovery," as thousands of followers would celebrate or weep along with her.

Initially, this was a tale about a raw struggle for a 69-year-old man who'd rarely had more than a common cold during his life before the pandemic.

The illness of the retired tire factory employee started with flu-like symptoms in February after a return from a Florida vacation. Within a week of falling ill, the father of two was gasping for air and was rushed to hospital. On March 20, a tube was inserted into his lungs and a ventilator sustained his body.

He was among the first Nova Scotians to enter critical care with COVID-19.

"When somebody's sick you, want to be there and hold them and hug them -- and it's the one thing you can't do with this," Marshall told The Canadian Press in a story in March.

The medical team decided to move him onto his side to promote the flow of oxygen, and Marshall documented the fears at the family home in Stellarton, where she and her husband Brian live with her parents.

"We were worried that he would go into cardiac arrest when the initial flip was to occur April 4. Scary. Very scary," she wrote.

Hundreds of comments of encouragement flowed in. Nurses would daily put a smartphone near their patient, and Cameron's wife Faye would sing to him through it: old, emotional rock 'n' roll songs.

The family wrote to him as though he were awake. They spoke of restless grandchildren fighting over Easter eggs, teased him about being unusually quiet and wrote down a steady record of his fluctuating vital signs.

As Cameron blinked on the video call, she and her mother screamed through the smartphone, "We love you," and he seemed to close his eyelids in reply.

"I don't even have words to express everything I feel! Papa bear has never let me down a day in my life and was not about to start now," Marshall wrote.

Then, just days later, the doctors said COVID-19 was still present. "This was a slight kick in the stomach," wrote Marshall.

The blog provided details of medical decisions, in particular the need to cut a small hole in Cameron's throat in a tracheotomy procedure.

Cameron was at risk for subglottic stenosis, the medical term for "a narrowing of the airway below the vocal cords and just above where they could place a tracheotomy," Marshall wrote. The condition often causes scarring for patients who have been intubated for long periods of time, she noted.

The 39-year-old documented how her father gradually came off the ventilator and the "intensive care delirium" in the four days after the tracheotomy.

He couldn't talk and was still running a fever, but "his mind is clear," she wrote on April 19, and his face told the story. "He just loves to hear Mom's voice. It's so sweet the little smile he gives her."

Yet, hours later, the roller-coaster continued, as Cameron's heart rate shot up to the 150s and Marshall and her mother sat silent and sombre at home, awaiting a return to normal. "This type of recovery is going to be a slow process. There are so many factors involved. There is weeks of rehabilitation in the near future," Marshall wrote.

But joy has returned. Cameron is speaking now, his first word was a raspy "Hi."

On April 26, he tested negative for COVID-19. This week he was moved to a private room at a hospital in New Glasgow to continue his rehabilitation.

She said her father is still too weak to speak at length, but her intention in telling his story is to educate the public about the dangers of COVID-19 and to urge compliance with the instructions of public health officials.

Many worries remain, such as the risk of blood clotting and secondary infections. There are months of rehabilitation ahead, and a careful re-introduction of regular food and exercise.

"He has a long, long road to go," Marshall said in an interview.

But in the meantime, he's been given a link to the blog, and he's been shown a few sections of it.

It is a record Marshall is confident her father will soon start to go through in detail, filling in the gaps of weeks in his life -- as his strength returns.

This report by The Canadian Press was first published May 8, 2020.

Canada's jobless rate soars to 13 per cent in April

Should your child wear a face mask?

Can the blood of a llama named 'Winter' be used to protect against coronavirus?

Has the new coronavirus mutated to be more contagious? Experts weigh in

U.S. objects to UN resolution on virus in dispute with China

'You deserve a raise': PM says deal reached to top up wages for essential COVID-19 workers