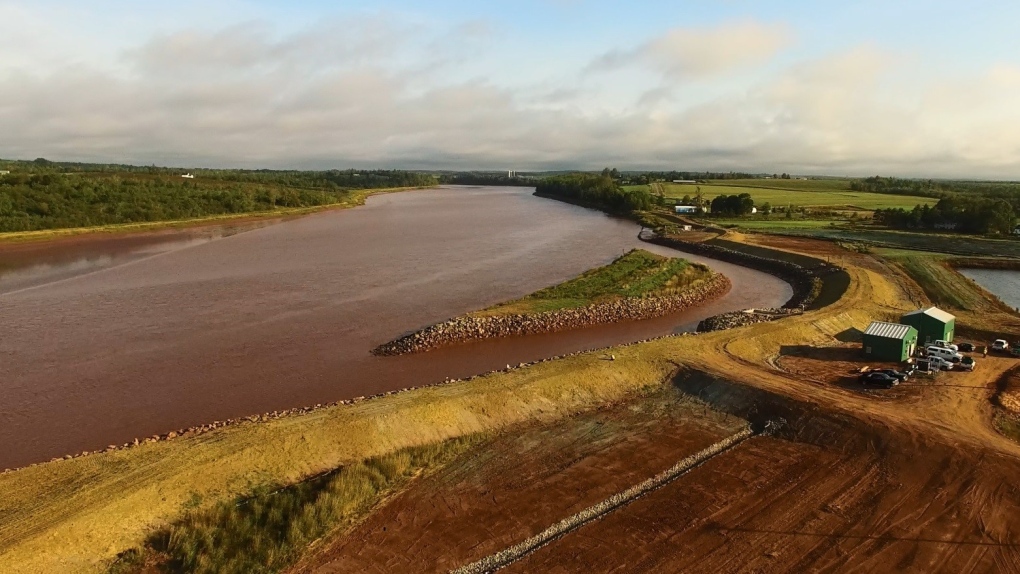 HALIFAX -- An Indigenous community in Nova Scotia argued before the courts Tuesday that a controversial project to store natural gas in underground caverns north of Halifax should be delayed until further talks with the Mi'kmaq.

Larkin said former environment minister Margaret Miller failed to properly assess how treaty rights and Aboriginal title were affected by the project, even though the Supreme Court of Canada has established the Crown's duty to consult Indigenous Peoples.

"She doesn't say what Aboriginal and treaty rights are at stake ... She doesn't consider what the required depth of the consultation needed was, and she doesn't indicate she understands deep consultation is required," Larkin told the judge.

Miller released her government's decision last April to give Alton Gas industrial approval for the project near Shubenacadie, saying the Mi'kmaq communities were treated appropriately.

Alton Gas plans to pump water from the Shubenacadie River to an underground site 12 kilometres away, where it will be used to flush out salt deposits and create up to 15 storage caverns.

Protesters have gathered at the site for several years, arguing the plan poses dangers to the traditional fisheries of the Mi'kmaq and risks harming the 73-kilometre river used by Indigenous populations for thousands of years.

Sean Foreman, a provincial Justice Department lawyer, argued that it's inaccurate for Larkin to argue the minister should have conducted a formal assessment to determine if so-called "deep consultations" are required.

He said in fact the minister did undertake consultations "at the highest end of the spectrum" with the community to ensure that existing treaty rights and possible Aboriginal title aren't "irreparably harmed."

"To suggest there's nothing in the record that focuses on the particular nature of aboriginal rights is simply not reasonable and certainly isn't consistent with a holistic review of the record," the government lawyer said during his afternoon submission to the judge.

During his arguments, Larkin said his client wants the courts to place a stay on the minister's approval and order further consultations take place with the First Nation, and suggested such a consultation would require about 60 days.

He noted historical evidence provided by the band that it had used the area for centuries to hunt and fish, and said that evidence heightens the requirement for thorough consultation from the Crown.

"The Shubenacadie area has historically been a key territory for the Mi'kmaq people," he said.

Larkin noted at the outset of his presentation that the Constitution established the recognition of existing Aboriginal title and treaty rights in 1982, and that the courts have further developed that constitutional law.

The lawyer argued that where there's a strong, established case for Indigenous land claims, there are legal precedents calling for "deeper consultation," and that may go so far as the band participating in the decision-making process or receiving financial compensation.

The judge appeared to home in on a letter from a former chief seeking further discussions with the province, calling it a "key piece of evidence," and asking Larkin whether it showed the band was simply opposed to the project, rather than willing to discuss it.

Miller wrote last year in her decision that the record "reflects extended efforts by the province to understand, explain, and mitigate against the impacts the Alton Natural Gas Storage project ... would have on fish, fish habitat and Aboriginal rights."

"I conclude that the level of consultation was appropriate to the circumstances and to the Aboriginal and treaty rights as asserted."

Her decision last year came after a 2017 Nova Scotia Supreme Court ruling that quashed the minister's original decision to dismiss the First Nation's appeal after she approved the project in 2016.

Justice Suzanne Hood concluded in that earlier decision that the First Nation was not supplied with the documents to mount a proper appeal, although she did not order a stay of the minister's project approval.

Since then, the company has obtained an injunction limiting protesters to a designated area of about 22 metres by 38 metres. Those who don't comply face arrest by the RCMP.