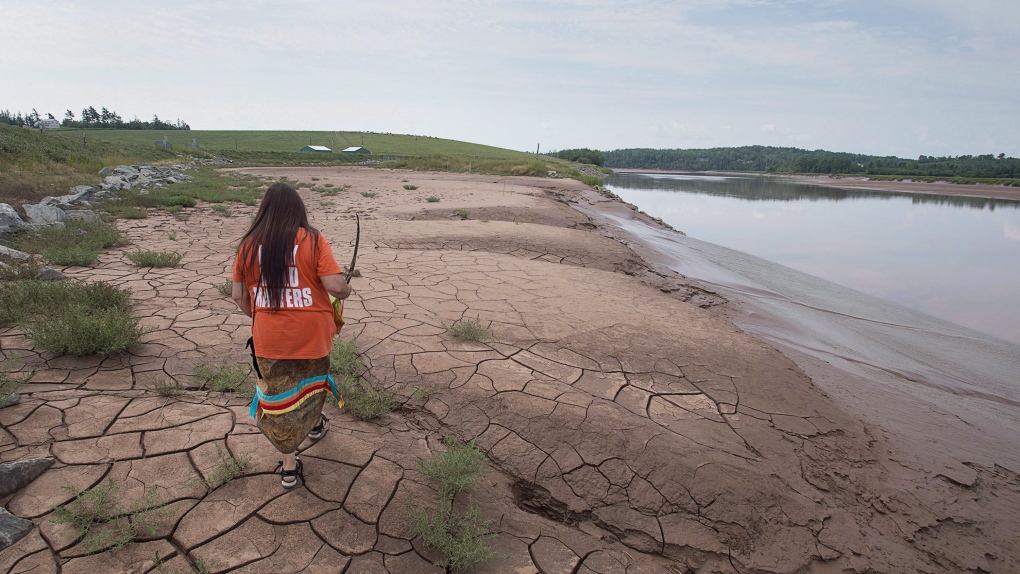 The Supreme Court of Nova Scotia has dismissed a bid by a First Nation to have new evidence introduced in a case involving the band's opposition to a company's plan to use river water to create caverns for natural gas storage in central Nova Scotia. Mi'kmaq activist Dorene Bernard walks on the shores of the Shubenacadie River, a 72-kilometre tidal river that cuts through the middle of Nova Scotia and flows into the Bay of Fundy, in Fort Ellis, N.S. on Tuesday, July 31, 2018. THE CANADIAN PRESS/Andrew Vaughan

HALIFAX -- A judge has dismissed a bid by a Nova Scotia First Nation to have new evidence introduced in a case involving the band's opposition to a plan to use river water to create caverns for natural gas storage in central Nova Scotia.

The Sipekne'katik (Indian Brook) First Nation wants to stop Alton Natural Gas Storage LP from using water from the Shubenacadie River to flush out underground salt deposits near Alton, N.S., then pump the leftover brine back into the river.

In July 2017, the Mi'kmaq band won an appeal of the provincial government's 2016 decision to allow Alton Gas to operate a brine storage pond near the river. But in April 2019, after a series of legal moves, the environment minister decided there had been sufficient consultation with the band and the project was again given approval -- with some changes.

The band filed another appeal in May 2019, and later sought a court order that would allow the introduction of an affidavit from a consultant that was not before the minister when the original decision was made.

The band says the affidavit shows the Sipekne'katik First Nation did not have the resources "to engage in meaningful consultation with the province."

In a decision released Friday, Justice John Bodurtha rejected the band's request, saying even though it was clear the Crown has a duty to consult, the introduction of the affidavit at this point would require "exceptional circumstances."

More importantly, the judge said the file added nothing new to the case.

"In the circumstances of this case, the admission of new evidence on an issue that is not new, relating to time periods that have already been extensively litigated over, should not be admitted simply on the grounds that it falls within the scope of the duty to consult," Bodurtha's decision says.

"In many instances where the duty of the Crown is the issue, applying an expansive approach to new evidence will be appropriate, but this is not one of those instances. The existing record is sufficient for the issue on appeal."

This report by The Canadian Press was first published Jan. 24, 2020.