N.S. pilot takes to the sky once again to pay his respects to those affected by tragedy 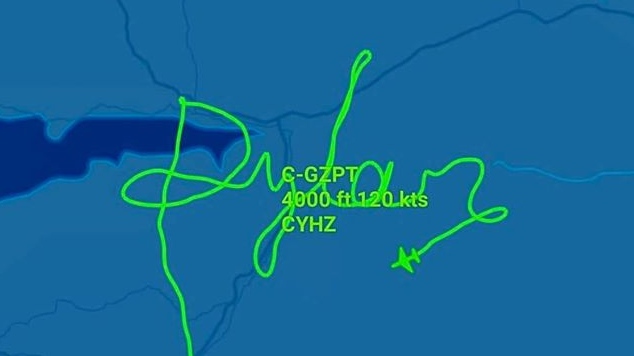 HALIFAX -- A Dartmouth, N.S., pilot has once again taken to the sky to pay his respects to those affected by tragedy.

On April 19, Demitri Neonakis felt the need to do something to show his support for the families of the 22 victims of the Nova Scotia shootings.

“I wanted to hug the community and the only way I could do it was by air,” said Neonakis at the time.

Neonakis jumped in his plane and headed in the direction of central and northern Nova Scotia.

The pilot’s flightpath was captured on radar, leaving the shape of a heart over the area of Portapique, N.S., where the tragic events first started to unfold.

On Monday, Neonakis went back up in the air in honour of Dylan Ehler, a three-year-old boy from Truro, N.S., who has been missing since May 6.

The boy’s disappearance has hit close to home for the pilot.

“I will never forget the sinking feeling when my own 6-year-old daughter went missing a long time ago (she was found),” said Neonakis in a Facebook post Monday.

An extensive search for the missing toddler has been underway in Truro since he was reported missing. The boy’s rubber boots were found in a brook near his grandmother’s home, and residents in the town have been showing their support by placing boots on their doorsteps.

Neonakis showed his support by using his flightpath to spell “Dylan” over the community.

“I feel the pain of the parents, the family, the community of Truro, and the men and women of the search team. This flight meant a lot to me and I still hold out hope for little Dylan.”