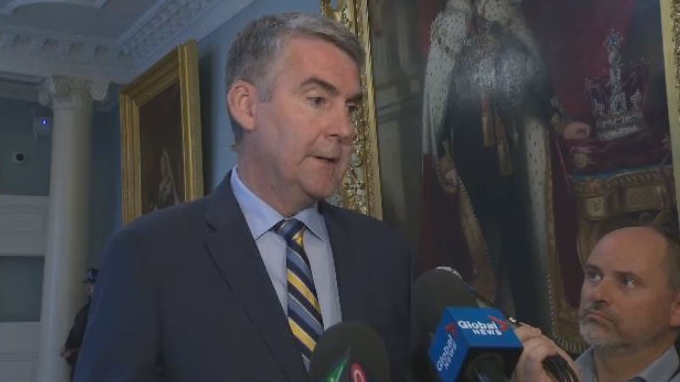 Nova Scotia Premier Stephen McNeil speaks to reporters at the legislature in Halifax on Oct. 16, 2019.

HALIFAX -- A lead negotiator for the Nova Scotia's Crown prosecutors' union says if his members are forced to go on strike it could mean criminal cases ranging from murder to sexual assault will be dropped.

Rick Woodburn, who is also president of the Canadian Association of Crown Counsel, said Tuesday the system is already stretched to meet the time requirements established by the Supreme Court of Canada in the Jordan decision.

He said if "even one" of the province's 100 prosecutors were to walk out for a single day, it could mean "murderers go free" and "sexual assault victims no longer get the justice they want and need."

As the union leader spoke, Stephen McNeil's Liberal government carried on with second reading of essential services legislation that removes the prosecutors' right to arbitration in the midst of ongoing contract talks.

Dozens of the province's Crown attorneys filled the galleries and halls of the legislature, listening as the bill was debated in question period and applauding opposition leaders.

In addition, representatives of prosecutors' associations in other provinces and territories -- in Halifax for a previously scheduled national meeting -- offered support to their Nova Scotia counterparts.

Outside the legislature, McNeil told reporters his government's move was necessary because the government can't afford what's being asked for, as it would set a pattern for other civil servants.

The Crown attorneys are seeking a 17 per cent salary increase over four years, which is higher than an established wage pattern set for the public sector and the seven per cent over four years offered by the government during negotiations.

The premier said he believes a the cumulative seven per cent pay raise is all that the province can afford, rejecting opposition party accusations his government is bargaining in bad faith.

"We set the wage pattern for the entire public sector .... So we're treating all workers the same," he said.

He said the government has allotted $350 million across the public sector for increased wages, and changing the approach now could cost an additional $500 million.

"This is fair in that they (prosecutors) have the option to continue to negotiate," McNeil said. "The deal we have on the table is what's fair to taxpayers."

But Woodburn said that with the Supreme Court of Canada Jordan decision setting time limits for bringing criminal cases to trial, the province's tactics could cause delays in cases that create risks to public safety.

"We're already at the point of falling apart .... And here we are a government that is saying 'Why don't you go on strike?"' he said.

"If one of us goes on strike for one day it's going to push all those cases into a Jordan territory that nobody wants to be in."

NDP Leader Gary Burrill denounced the province's move as "unfair and dishonourable," saying it threatens the right to collective bargaining.

The proposed changes to the Crown Attorneys' Labour Relations Act would override the current framework agreement and give the prosecutors the right to strike while requiring that they provide essential services.

The Nova Scotia Crown Attorney's Association, has said its 100 members were unaware of the government's plan, only finding out the legislation was coming as it was tabled in the legislature.

The collective agreement expired March 31, and both sides met twice for negotiations in June before two conciliation meetings were held this month.

Nova Scotia Crown attorneys are currently the highest paid in Atlantic Canada but the increase would only rank them in the middle nationally.

According to figures released by the province, they currently earn up to $149,000 annually, a figure that would increase to about $160,000 under the government's offer.