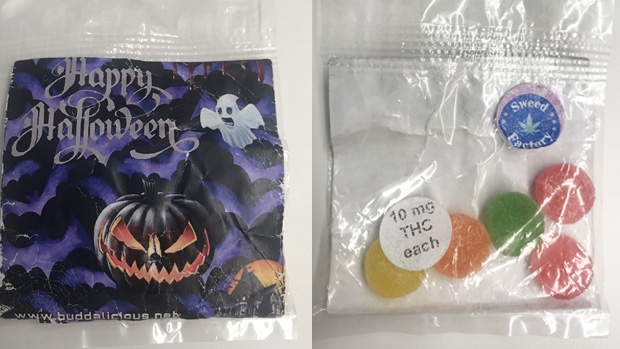 The RCMP say these cannabis edibles were found in a child's Halloween candy in the Annapolis Valley. (Nova Scotia RCMP)

HALIFAX -- The RCMP is urging parents to check their children’s Halloween candy after one parent in Nova Scotia’s Annapolis Valley reported finding cannabis edibles among their child’s treats.

The incident was reported to police in Coldbrook around 9:30 p.m. Thursday.

The parent told police their group was trick-or-treating in the areas of Cambridge, Kentville and Coldbrook. They aren’t certain which home the cannabis edibles came from.

Police say there were eight children in the group, and all of their candy was checked by an adult, but only one child received the cannabis edibles.

The package had a Halloween-themed label on the front and contained several jujube candies. A sticker on the back indicated the THC content of the candies, which police say alerted the parent.

Police have seized the cannabis edibles.

Police say the investigation into the incident is ongoing. They’re asking anyone with information about the incident, or who may have had a similar experience, to contact them.