HALIFAX -- Nova Scotia is reporting two new cases of COVID-19, including a new case in the northern zone, which hasn’t seen a new case of the virus in over two weeks.

The second case was identified in the central zone, which contains the Halifax Regional Municipality, and contains the largest number of cases.

There are now 1,055 confirmed cases of COVID-19 in Nova Scotia, though most people have recovered from the virus.

The province isn’t reporting any additional deaths at this time. Fifty-nine people have died from COVID-19 in Nova Scotia, including 52 residents at Halifax’s Northwood long-term care facility, which has seen the most significant outbreak of the virus.

Premier Stephen McNeil and Chief Medical Officer of Health Dr. Robert Strang will not be holding a news conference on Thursday. The next news conference will be held on Friday.

The province says two more people have recovered from the virus, for a total of 977 recoveries.

This leaves 19 active cases in the province.

There are 16 active cases of COVID-19 at Northwood, involving 12 residents and four staff members.

No other long-term care facilities are reporting active COVID-19 cases at this time.

This leaves three active cases outside of Northwood.

The province says one more person has been admitted to hospital. There are now eight people in hospital and three patients are in intensive care units.

The latest cases were confirmed in the Nova Scotia Health Authority’s northern and central zones.

The western and eastern zones are reporting no additional cases at this time. 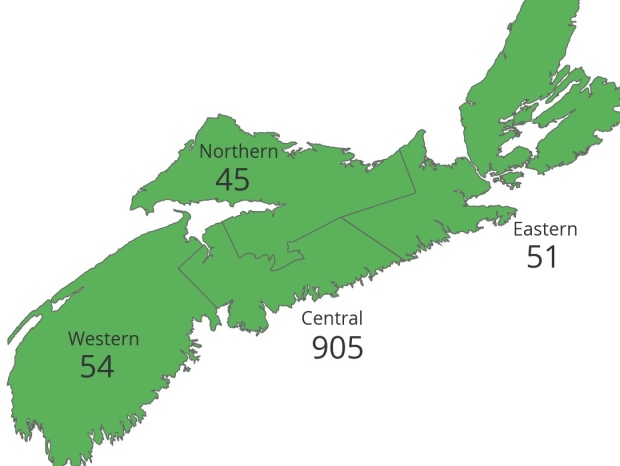 Most businesses can reopen on June 5

On Wednesday, the province announced that most businesses that were forced to close at the start of the pandemic in March, can reopen on June 5.

Some health providers, including dentists, optometrists, physiotherapists and massage therapists, can also reopen on June 5.

The businesses and health providers are required to follow the protocols tailored to their sector, as approved by public health.

The province hopes to allow daycares to reopen on June 15, but that date is not confirmed at this time.

While businesses may be reopening, the public health directives around physical distancing and five-person gathering limits remain in place.