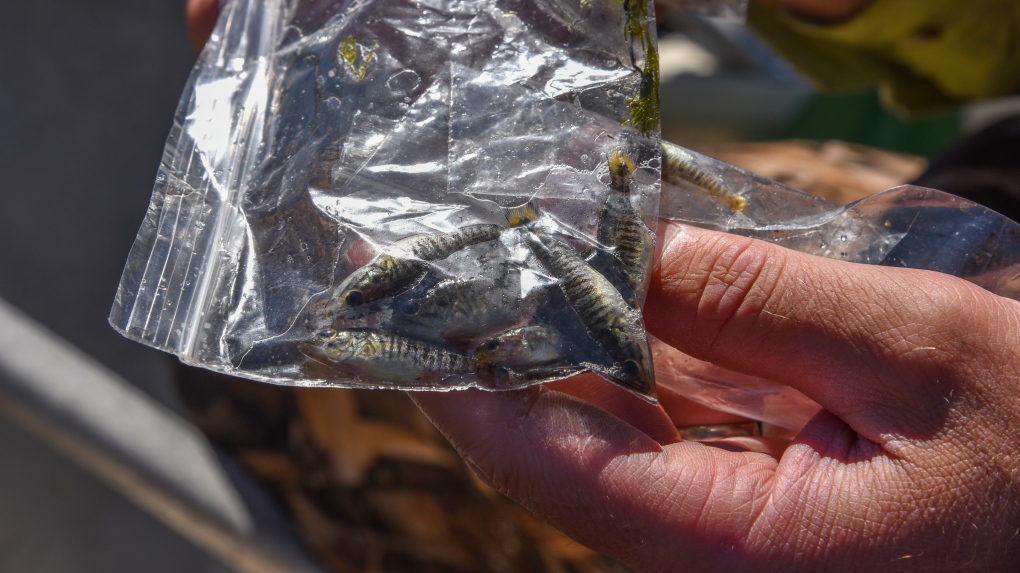 Smallmouth Bass are seen in a bag after being removed from Miramichi Lake in this undated handout photo. (THE CANADIAN PRESS/HO, Geoff Giffin, Atlantic Salmon Federation)
WOODSTOCK, N.B. -

A New Brunswick group hoping to eradicate an invasive fish species from the Miramichi watershed says a legal bid to stop their work has been withdrawn, but they say their plan is still facing opposition.

The Working Group on Smallmouth Bass Eradication in the Miramichi issued a statement Wednesday saying a hearing scheduled before the Court of Queen's Bench in Woodstock was cancelled. As a result, an application for an injunction was withdrawn.

A number of cottage owners are trying to stop the group from using the chemical rotenone to kill the fish. Neville Crabbe, a spokesman for the working group, said it plans to move ahead with its eradication plan, but he added that delays caused by the court action will make it difficult to get reorganized.

On Aug. 9, the working group was handed a cease-and-desist order by the same court after the cottagers filed for an injunction on Aug. 2.

That order barred the working group from taking any action on Miramichi Lake, Lake Brook and a portion of the Southwest Miramichi River until the court hearing on Wednesday. The court order went into effect hours before the spraying of rotenone was to begin.

"The working group was forced to dismiss more than 130 personnel from around the world that had gathered in Fredericton," Crabbe said Wednesday in a statement. "We had to demobilize and store equipment, putting the entire project in jeopardy .... Several significant challenges must be overcome because of the delay."

Meanwhile, a lawyer representing a group of Indigenous "water protectors" says they plan to seek a judicial review of the project at the Federal Court of Canada. On Wednesday, Charles Bryant said his clients will argue the federal Fisheries Department failed in its duty to consult Indigenous people when it approved the spraying program.

Crabbe, however, has described the eradication plan as an Indigenous-led conservation project that has been authorized by the federal and provincial governments.

"The working group stands by the project because smallmouth bass threaten the native ecosystem of the Miramichi, including Atlantic salmon, as well as the cultural identity and economy of the region," Crabbe said in a recent statement, adding that the project is led by the North Shore Micmac District Council.

The Atlantic Salmon Federation is also part of the working group.

The original court order names Daniel Houghton, a cottage owner on Miramichi Lake, as one of three plaintiffs. Houghton has said he is opposed to the eradication plan because he believes the chemical will poison every fish in the 250-hectare lake.

In court documents, the cottagers say rotenone would kill all the fish in the lake. They contend that they wouldn't be able to swim or fish in the lake for at least a year and that the rotting of fish killed by the chemical would cause "irreparable harm." None of the claims have been proven in court.

The smallmouth bass population can be managed through other means, Houghton said in a recent interview.

In use since the 1950s, rotenone targets fish gills and inhibits their breathing while leaving birds and mammals unaffected.

The working group wants to destroy smallmouth bass because the fish can alter ecosystems by preying on native species such as Atlantic salmon and brook trout.

A plan to treat the lake last September was put on hold after protesters refused to leave the area.

This report by The Canadian Press was first published Aug. 18, 2022.