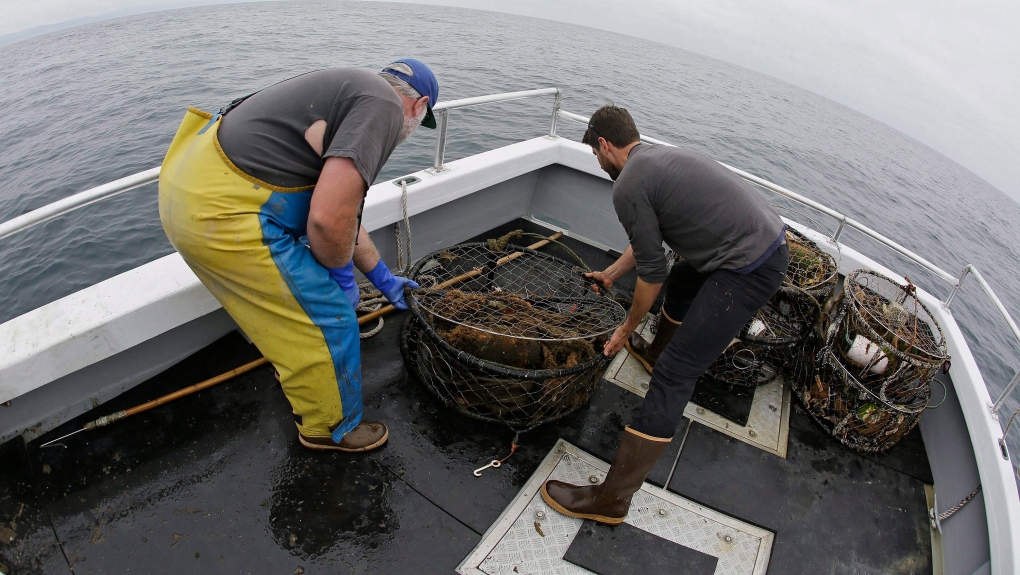 The three years of funding for the Acadian Crabbers Association is to test such trap technologies as breakaway gear and ropeless buoys. Hydrophones will also be used to assist in tracking the endangered whales.

Federal Fisheries Minister Jonathan Wilkinson said the funding aims to balance the protection of the endangered right whale with support for the work of thousands of fishermen who "rely on the sea for their livelihoods."

"The technologies developed and tested through this project are helping the seafood industry move towards greater sustainability," Wilkinson said in a news release.

The standard traps currently used by fishermen use a rope that's suspended in the water column with a buoy at the top -- gear that poses a potentially deadly hazard for whales that end up entangled.

The New Brunswick fishermen are now testing two different systems -- one that holds the rope and buoy at depth until the fishermen activate a release tool that brings them to the surface so the traps can be hauled, and another that uses an inflatable buoy that's attached to the trap and is filled with air when its time to bring the trap to the surface.

"It is not something that is going to roll out soon. It's still very much in the developmental stage," said Sean Brillant, a marine biologist with the Canadian Wildlife Federation.

Brillant has consulted with the Acadian crabbers on their trap testing and believes their experience is needed to ultimately come up with a technology that serves all interests.

He said although there are many "immediate naysayers" among fishermen, there could be ultimate benefits to fisheries that struggle when areas are closed to protect whales.

"Most of the effort we are working on is not to convert the entire industry to ropeless fishing right now. It is to allow fishers to fish in those areas that need to be closed because the danger of entangling whales is so high," said Brillant. "So the value of investing and working on this technology is actually to improve fishing."

Brillant said there are two major challenges that remain, including finding a trap system that can work in a way that is operational and useful to commercial fishing, and one that can easily be located at depth both by fishermen and federal fishery enforcement officers.

"If we can get it to work it is a great solution," he said. "If we can find a way to get that end line out of the water column, that will solve that (entanglement) problem."

The Department of Fisheries and Oceans announced rules for 2019 that built upon those put in place in the Gulf last year.

There are mandatory speed restrictions for vessels 20 metres or longer when travelling in the western Gulf. Ottawa also reduced by half the protection area for the season-long closure of the snow crab and lobster fisheries, limiting it to the area where 90 per cent of right whales were spotted last year during prime fishing season.

The latest estimates place the number of North Atlantic right whales at fewer than 420.

The funding for the Acadian Crabbers Association comes through the $400-million Atlantic Fisheries Fund, which is jointly funded by Ottawa and the region's provincial governments.