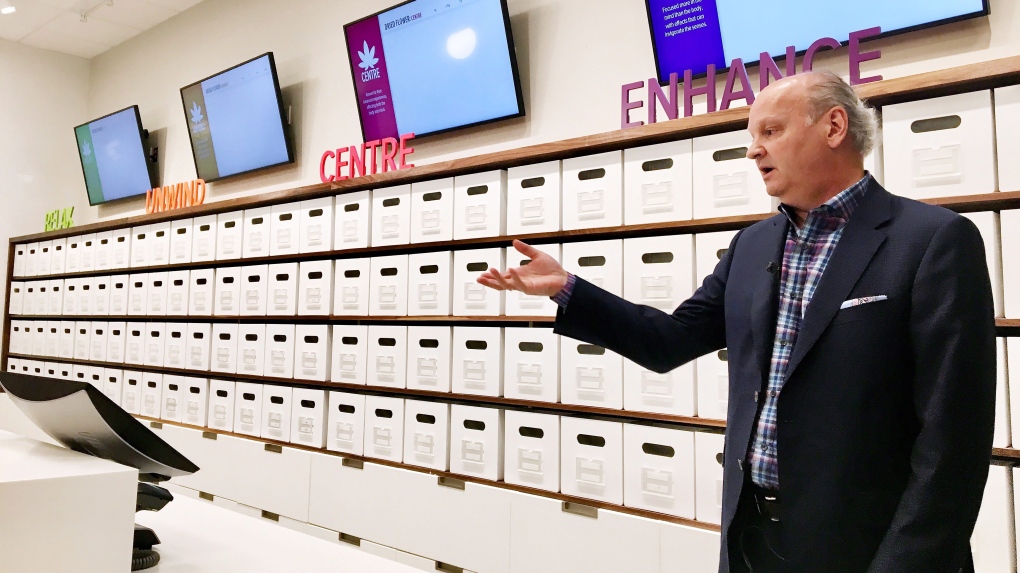 Nova Scotia Liquor Corporation president and CEO Bret Mitchell gestures during a media tour of a cannabis section at one of its stores in Halifax on Wednesday, July 18, 2018. (THE CANADIAN PRESS/Aly Thomson)

A Halifax psychology professor issued a news release criticizing the model, which the Nova Scotia Liquor Corporation says is unique in the world.

Marijuana is to be sold under the same roof as alcohol, although the two retail areas will be kept separate.

Simon Sherry of Dalhousie University said Wednesday other jurisdictions have kept them separate because "it's just not a good idea."

But Justice Minister Mark Furey said Thursday the NSLC has a track record with regulated products, and is following a federal marijuana panel's advice on protective measures including staff training and no cross-promotion.

Twelve cannabis stores will open inside NSLC locations on Oct. 17.

"We have full confidence in the Nova Scotia Liquor Corporation's ability to retail a regulated product," said Furey. "Cannabis is co-located but it is very separate from the alcohol elements."

Furey said the government will re-examine its retail model after a year, but he expects no changes.

"I think the next 12 months is going to be an important period in the evaluation and assessment in the model we've advanced," Furey told reporters Thursday.

In his news release, Sherry pinpointed three problems with co-sales: Some cannabis users are trying to avoid liquor stores because they have a problem with alcohol; they may encourage non-users to try cannabis products; and they may encourage harmful co-consumption.

"There are good reasons why other jurisdictions have decided against co-location. It's just not a good idea," he said.

Sherry said Nova Scotia already has the greatest percentage of cannabis users and cannabis use disorders, as well as grams smoked per person.