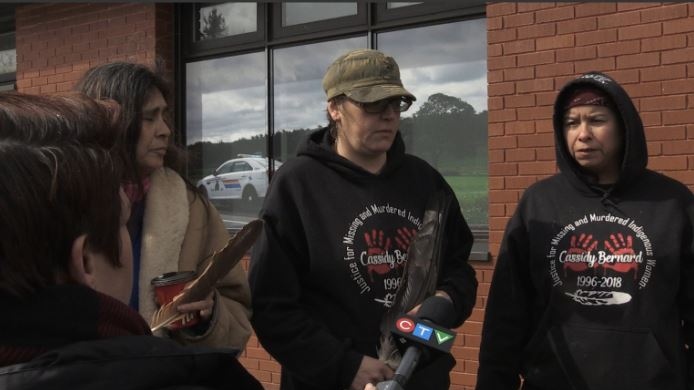 The three women who were arrested on April 10, 2019, speak outside the RCMP detachment in Enfield after they were released. From left, Darlene Gilbert, Kukuwis Wowkis, and Kiju Muin -- the latter two are Mi'kmaw names.

HALIFAX -- Three Indigenous women described as "grassroots grandmothers" who were arrested last week at a rural construction site north of Halifax have filed a title claim over land where a company plans to build a natural gas storage facility.

Their lawyer, Michael McDonald, told the Nova Scotia Supreme Court Wednesday the claim is based on the Treaty of 1752 with the Crown.

"The notice of motion is for an aboriginal title claim for the lands currently being used by Alton Gas," McDonald said.

He said an injunction would also be filed to prevent Alton Gas from doing further work along the Shubenacadie River at Fort Ellis while the title claim is being settled.

Justice Gerald Moir scheduled Aug. 15 to consider the alleged breach of the temporary injunction by the three women, while four dates have been set aside in December for the motion on the title claim.

Alton Gas plans to use water from the river to create large, underground storage caverns, and protesters fear the 73-kilometre tidal river cutting through the middle of Nova Scotia will be polluted.

Outside court Bernard expressed satisfaction with the outcome as she and the others clutched eagle feathers. "It couldn't have gone better, because we are going forward with aboriginal title," she said.

Bernard also said that although her group signed the order to stay away from the work site, they expect to return to the site at some point.

"We signed that undertaking just to stay away from Alton Gas's little playpen," Bernard said.

The "playpen" Bernard referred to is a fenced-in grassy field about 22 metres by 38 metres where protesters were expected to remain as part of the temporary injunction.

Lawyers for Alton Gas declined to speak to reporters about the developments in court, but supporters of the grandmothers made it clear where they stand.

"They want us to be a landless people," said Elizabeth Marshall of the Council of Grandmothers.

"The law states that we are the legal, legitimate title holders of all of Mi'kma'ki," she said, referring to the traditional territories of the Mi'kmaq people. She added that the title extends over "all of so-called Nova Scotia."

McDonald told reporters that he may request more time for the land title hearing than the four days he agreed to in court.

"I'm probably going to end up needing two weeks for that, because I'm going to have to provide notice to both the provincial and federal governments," he said. "I plan on bringing in a large amount of witnesses."

Gilbert, Bernard and Isaac were arrested Apr. 10. Affidavits filed Apr. 12 by RCMP Const. Trevor Gallen said the women were arrested at the work site after it was found that they breached conditions set out in the injunction.

Gallen said each of the women was "found to be occupying an area on the property which was outside that designated area." He said each was provided "numerous opportunities to comply with the injunction in order to avoid arrest, but they refused.

Gallen said the women were taken to the nearby Enfield RCMP detachment where they were provided with the opportunity to speak with legal counsel. They were later released on an undertaking to appear in court.

The arrests were carried out while police also erected roadblocks in the area to prevent the public from entering. They told reporters at the time the step was taken to ensure public safety.