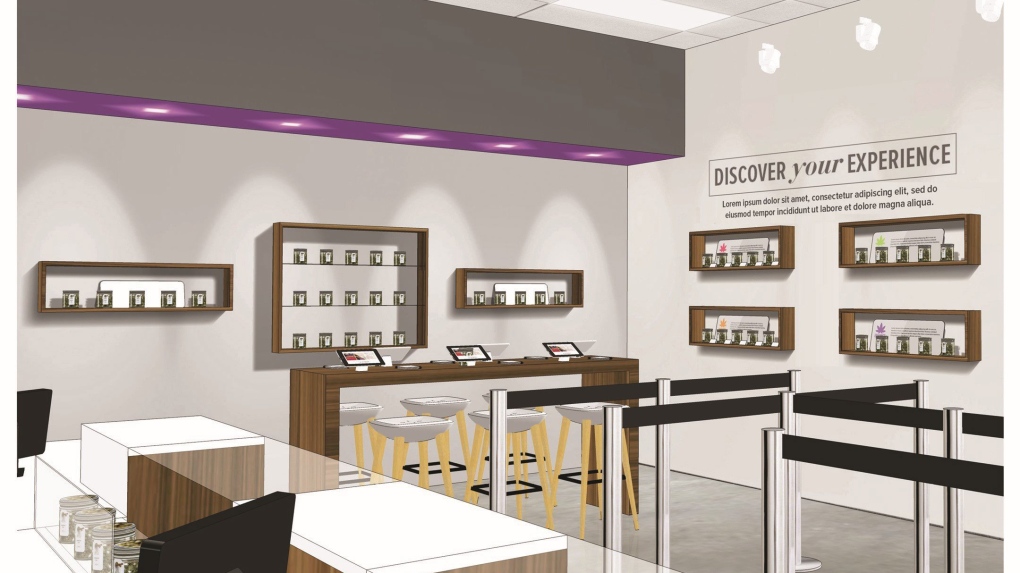 HALIFAX -- Nova Scotia's legal marijuana stores will be "bright, open, and inviting" -- but the product itself will be sold in secure containers and then sealed in a paper bag.

It will be sold in clearly demarcated areas of 11 NSLC stores that also sell alcohol, while one downtown Halifax store will be the province's lone pot-only retail outlet.

"There will be a section of the store that has a frosted glass area, because you are not allowed under federal regulations to be able to see the product," corporation spokeswoman Beverly Ware said Monday.

"The key for us is to keep the area bright and open and inviting and in keeping with the NSLC stores that people are accustomed to."

The drawings show a well lit area where various strains of marijuana are displayed in glass jars inside glass cases. The cash register area is flanked by a station where customers can get information about the marijuana they are buying on computer tablets.

Bright posters outline the various categories of product according to levels of THC or medicinal CBD.

The categories are Relax, Unwind, Centre, and Enhance, Ware said.

With the exception of the pot-only Halifax location, customers will not be allowed to smell the product on the premises so the odour doesn't permeate into areas where alcohol is sold.

"But you are able to closely look at the product and we will have a written description of what the smell of the product would be like if you were able to open it," said Ware.

Before they begin to shop, Ware said customers will be met by a product specialist who will ask questions about the type of marijuana they are looking for, and who will also give health and safety advice.

Customers will be advised not to consume alcohol with their purchase and will be asked to store it safely once they are home. They will also be told not to smoke pot while driving.

"We expect that there might be a number of new users and cannabis affects different people differently," said Ware. "So we'll be asking customers to start low and slow, to start with lower levels of THC and to slowly learn how the product will react with their body."

Ware said the marijuana will only be handled by the clerk who will get it for the customer. It will be sold in secure containers similar to those used for drug prescriptions and then sealed in a paper bag.

Ware said eight of the 12 stores are currently under renovation and the goal is to have them ready for a July startup.

Ware said it's estimated the average cost of the renovations for the "stores within a store" is just over $500,000. She said there is no cost estimate yet for the stand-alone outlet, although the entire startup cost for the NSLC is estimated at between $10 million to $11 million.

She said product supply is yet to be secured, although NSLC officials were in the process Monday of narrowing down possible suppliers.

Nova Scotians will also be allowed to grow up to four plants on their own, and will be able buy online from the NSLC.