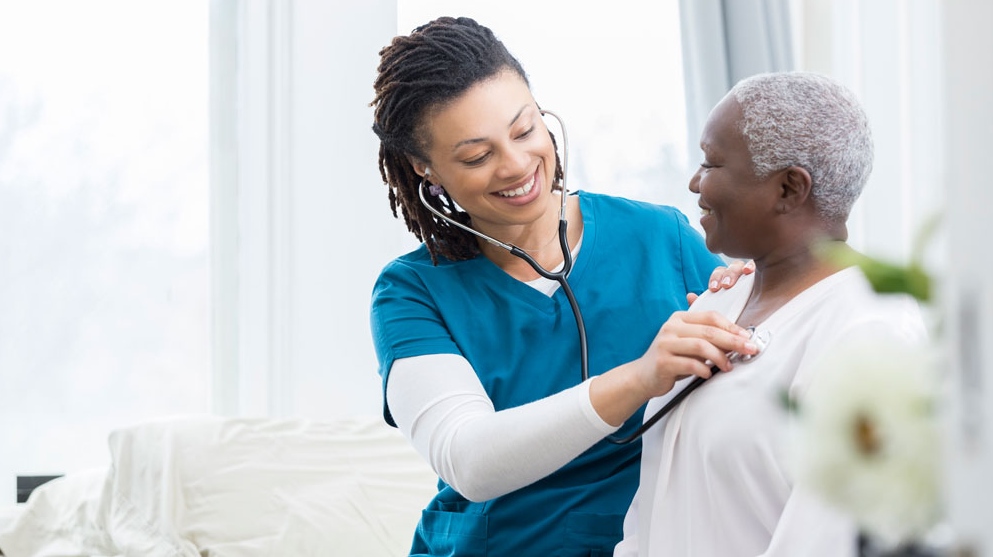 A nurse is seen using her stethoscope on a senior in this undated stock image. (iStock)

Monday marks the beginning of National Nursing Week, and while Maritime health authorities are recognizing those in the field on social media, some say the ongoing shortages make it hard to stay in the profession.

Paula Doucet, the president of the New Brunswick Nurses Union, says when she became a registered nurse 26 years ago, she had time to sit with patients and talk them through what, at times, was a life-altering day.

There isn’t that time anymore, she says.

“Specifically the ability to spend time with patients and their families, to do proper teaching, proper explanations - helping them not be re-admitted, say, to a hospital and to take charge of their care and to really understand their maybe newly diagnosed situation,” she said. “Right now, we don't have that opportunity. We don't have that time to sit with our patients.”

Doucet says the pandemic made the situation worse, but adds the shortage was a problem before COVID-19.

As of December 2021, there were about 1,300 vacant nursing positions in New Brunswick, including registered nurses, licensed practical nurses and nurse practitioners.

The situation is similar in Nova Scotia, with over 800 registered nurse vacancies alone.

“When I first started, I worked as a casual because there were no jobs and in those last 26 years, we've seen it come full circle a couple of times, but right now, we're in the worst probably human resource shortage that this province has seen in decades,” said Doucet. “So, it's put an enormous amount of pressure and strain on those who are trying their very best to take care of New Brunswickers.”

Janet Hazelton of the Nova Scotia Nurses Union says nurses in that province are also feeling the strain.

“Five years ago it was very difficult to get a job at the IWK and we have vacancies there now. That just goes to show how severe the nursing shortage is,” she said.

However, both presidents have heard of a more concerted effort to hire graduates – in Nova Scotia, at a rate not seen anywhere else.

“Every new grad that graduates in Nova Scotia from whatever nursing program is being offered regular full-time jobs,” Hazelton said. “Which, it’s the first province in the country to do that and it's the first time it's ever been done in this province.”

To mark the week, Hazelton is hoping more Maritimers try to be kind to nurses – saying there’s been too many close calls where situations can turn violent.

“We have too many incidents of violence in our workplace where patients and/or their families become aggressive and yell at nurses or physically assault them. That is not appropriate. It should never happen, and people need to understand and appreciate, they’re there doing their job,” she said.