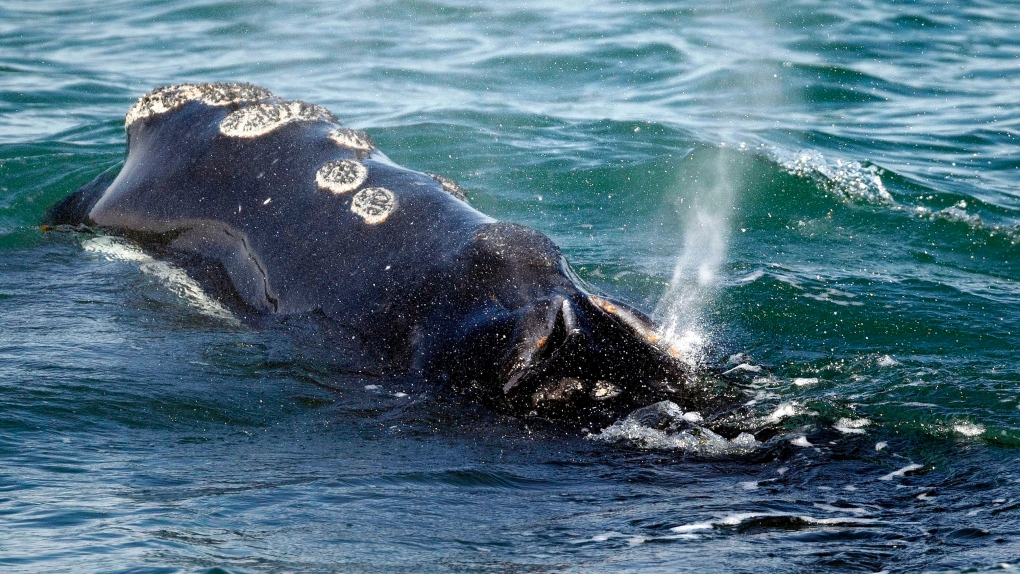 A North Atlantic right whale feeds on the surface of Cape Cod bay off the coast of Plymouth, Mass. on March 28, 2018.Measures taken to protect North Atlantic right whales from being struck by ships and getting caught in fishing gear may not be doing enough to prevent more whales from being hurt or killed in Atlantic Canada, according to data contained in a new federal scientific review. (THE CANADIAN PRESS/AP, Michael Dwyer)

HALIFAX -- An American research group is warning that the rise in fishing-gear entanglements among North Atlantic right whales is hurting the ability of the endangered species to reproduce and care for their young.

The new report by Woods Hole Oceanographic Institution explores the top threats to the whales during the species' calving season, which began in mid-November and lasts until around April 15, and which takes place off the southern coast of the United States.

Michael Moore, senior scientist with the organization and co-author of the report, called "Saving the North Atlantic right whale," said 10 per cent of the species has been lost in the past four years. He said whales waste valuable energy escaping and healing from entanglements instead of using that energy to raise and feed calves.

"You're not going to get recovery of a species if you just stop killing them, you've also got to give a chance to get pregnant and reproduce and fill the cohort," he said in a recent interview.

Moore's report said between 2010 and 2015, 85 per cent of right whale deaths were caused by entanglements and the rates of non-fatal and lethal entanglements have increased. Fishing gear is increasingly robust, Moore explained, making it more difficult for whales to escape and prolonging non-fatal entanglements.

Climate change, Moore said, is causing the whales to travel toward the cold waters of the Gulf of St. Lawrence for food, where the animals are encoutering fishing gear for snow crab that he said can weigh up to 1,000 pounds -- increasing the risk of more damaging entanglements.

"The management has become more complex because climate warming has changed where the right whale's food is most abundant and so the right whales have changed their movement path," Moore said. "That means that whatever mitigation was there, however efficient it was, has failed to adequately move with them."

The U.S.-based National Oceanic and Atmospheric Administration last month said the right whale population has dropped dramatically, to 366 in 2019 from 412 in 2018.

Moore's report suggests "ropeless" fishing as a possible solution to entanglements. That harvesting method uses a coiled rope attached to a trap on the ocean floor. Fishermen can send an acoustic signal to the trap, releasing the rope to the surface where it can be hauled into a vessel.