Oland murder and trial: A timeline of events 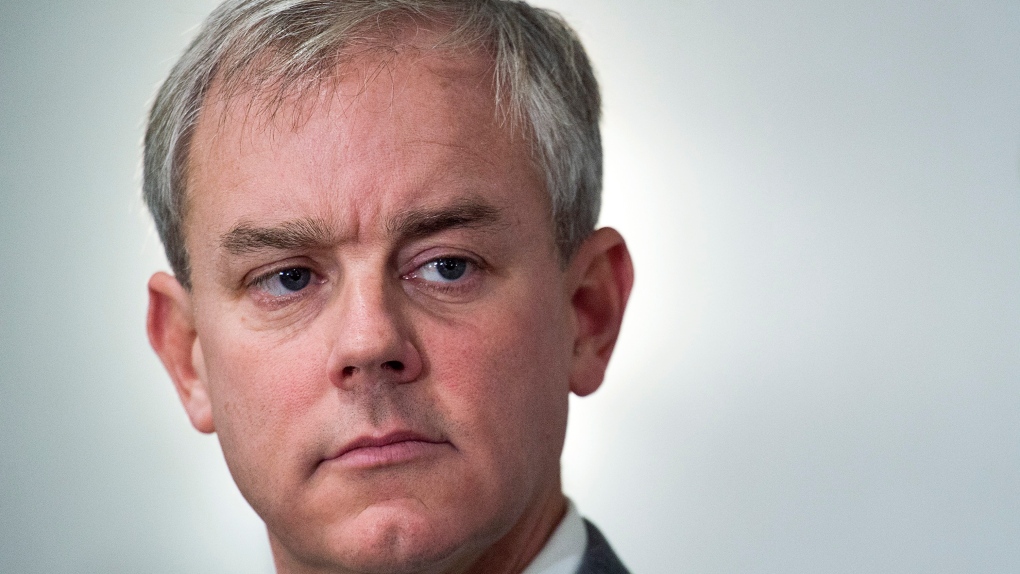 SAINT JOHN, N.B. -- A timeline of events in the murder of Richard Oland and the prosecution of his only son Dennis:

July 6, 2011: Richard "Dick" Oland is murdered in his Canterbury Street office in uptown Saint John, N.B. He suffered 45 blunt and sharp force blows to his head, neck and hands, although no weapon was ever found.

Dec. 12, 2014: Oland ordered to stand trial after a preliminary hearing which lasted 37 days and heard from 42 witnesses. Family members issue a statement saying they know Dennis is innocent. "Throughout this ordeal our faith in him continues to be absolutely unwavering," the family says. "We are devastated that we will have to endure a trial but we know Dennis will be found innocent in an objective and fair process in a court of law.

Sept. 8, 2015: Dennis Oland pleads not guilty as jury selection begins in a hockey arena turned into a makeshift courtroom to accommodate hundreds of prospective jurors.

Sept. 17, 2015: Richard Oland's secretary, Maureen Adamson, testifies the businessman was chatting about family history with Dennis Oland the last time she saw him alive on July 6, 2011. She said the elder Oland had a good relationship with his son.

Oct. 7, 2015: Sgt. Mark Smith testifies that some of Richard Oland's injuries were caused by a hammer-type instrument, while others were inflicted with a blade-like weapon that left wounds that were six- to seven-centimetres long.

Oct. 8, 2015: Sgt. Mark Smith testifies that no blood or DNA from Dennis Oland was found on Richard Oland or at the crime scene.

Oct. 13, 2015: Former Saint John police officer Mike King testifies he was asked by senior officer Glen McCloskey not to reveal that he had entered the crime scene where Oland's body was found.

Oct. 14, 2015: Glen McCloskey testifies he did not suggest that anyone change their testimony.

Oct. 15, 2015: An RCMP blood spatter expert from Halifax testifies he was called four days after the murder to examine the scene. Sgt. Brian Wentzell says blood had dried by then and was beginning to flake away from the floor.

Oct. 21, 2015: The jury is shown a video of a police interview with Dennis Oland on the day his father's body was found. Asked by lead investigator Const. Stephen Davidson whether he had any involvement in the death, Oland replies, "No."

Nov. 3, 2015: Justice John Walsh gives the jury instructions on evidence that suggests there was an inadequate police investigation in the case. He says it is up to the jury to decide whether that evidence alone or in combination with other evidence creates doubt of guilt.

Nov. 24, 2015: An expert in DNA analysis testifies that a brown sports jacket seized from the home of Dennis Oland tested positive for blood, and DNA samples matched the profile of Richard Oland. Dennis Oland had told police he was wearing a navy blazer when he visited his father on July 6, 2011, but witnesses and security camera video shown at the trial show him wearing a brown jacket that day.

Nov. 25, 2015: After more than 40 witnesses, the Crown concludes its case with Tom Suzanski, an expert in DNA analysis who worked on the case at the RCMP lab in Ottawa.

Dec. 2, 2015: Dennis Oland testifies he made a mistake when he told police that he was wearing a navy blazer the last time he saw his father. He later chokes back tears and wipes his eyes while telling the courtroom he misses his father.

Dec. 14, 2015: Closing arguments are presented. Defence lawyer Alan Gold says the jury should reach a verdict of not guilty based on Oland's testimony and the circumstantial evidence presented by the Crown. Crown attorney P.J. Veniot says Oland was the last person to see his father alive and had opportunity to kill him.

Oct. 24, 2016: New Brunswick's appeal court overturns Oland's conviction and orders a new trial, arguing the trial judge did not properly instruct jurors regarding one key piece of evidence: the brown jacket Dennis Oland wore the night of the murder with traces of blood matching his father.

July 13, 2017: The Supreme Court of Canada decides not to hear appeals in the Oland case.

Nov. 7, 2018: Trial is adjourned for two weeks while unspecified legal issues are addressed.

Nov. 20, 2018: Mistrial is declared in the second murder trial of Dennis Oland. Justice Terrence Morrison dismisses the jury because of "improprieties," and decides the case will be heard by Morrison alone.