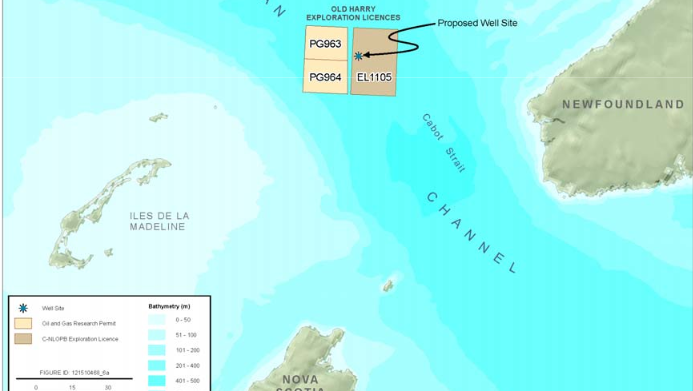 ST. JOHN'S, N.L. -- Environmentalists fearing the consequences of an oil spill in the Gulf of St. Lawrence, home to thousands of marine species, went to court Monday to fight an offshore exploration licence.

Environmental groups including the David Suzuki Foundation and Sierra Club Canada Foundation argued in provincial Supreme Court Monday that it could set a dangerous precedent for managing the risky but lucrative industry.

The Old Harry site sits about 80 kilometres off the southwest tip of Newfoundland, near the border with Quebec.

Gretchen Fitzgerald of the Sierra Club Canada Foundation said the case could have "far-reaching implications for Canadian oceans" as the industry prepares for rapid growth.

"I think this is an important case for showing what are the bounds of the powers of these boards," she said.

Representing the applicants, Ecojustice lawyer Josh Ginsberg said the area in question is a sensitive ecosystem that houses not just marine species but also fishing and tourism industries, and offers an important food source for surrounding First Nations.

"This isn't just about this one licence, this is about what happens in the Gulf of St. Lawrence forever more," Ginsberg said outside the courtroom.

But the Canada-Newfoundland Offshore Petroleum Board told the judge Monday its decision to extend the existing licence was reasonable within its mandate and powers.

The case has effectively become one of principle for the industry and its opponents -- Corridor Resources has put its site operations on an indefinite hold.

It announced in June 2018 it was suspending exploratory work on the project, saying there was no "viable path" to drilling an exploration well before its licence expired in 2021.

Ginsberg said the company's move to suspend operations speaks to the principle at stake: that companies will be able to flout the guidelines regulating the industry.

The offshore board's lawyer, Amy Crosbie, argued the new licence simply represented the legal exchange of one of Corridor's assets for another -- the original licence was exchanged for the new one covering the same area.

The board argued that circumstances outside Corridor's control, like consultations between the Crown and Indigenous groups, caused unavoidable delays in environmental assessments that justify the extension of the licence.

The case could also have lasting implications for the province's finances as the offshore industry develops and grows.

Plans include 100 proposed new exploration wells and over 650,000 barrels of oil per day by the year 2030, with shortened time "from prospect to productivity."

The one-day court proceeding was interrupted by an impending storm, and all parties will return to court in St. John's on Tuesday.