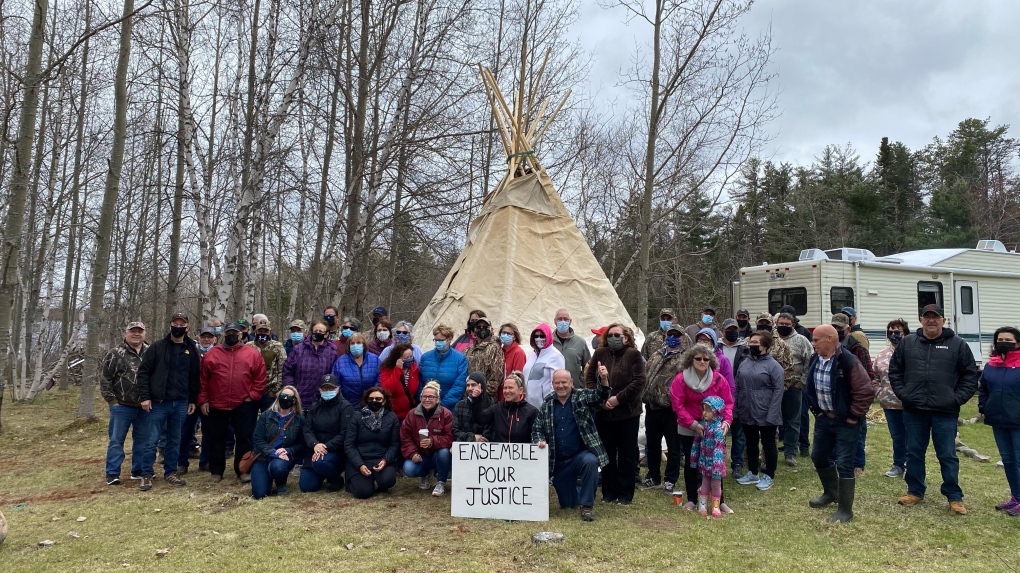 Some members of the 67 families who continue the fight with Parks Canada over expropriation are shown in Kouchibouguac National Park in New Brunswick on Wednesday, May 19, 2021. (THE CANADIAN PRESS/Kevin Bissett)

Parks Canada is renewing efforts to get family members of the late Jackie Vautour to end their fight to remain within New Brunswick's Kouchibouguac National Park.

Vautour staged a 50-year battle against the government's expropriation of the land up to his death in February of last year, stating he was Metis-Acadian and the land is unceded Mi'kmaq territory. Since his death, Vautour's wife and two sons have vowed to continue the fight and are seeking support from the courts.

But last week Parks Canada wrote to the family, saying their continued occupation of property within the park constitutes a nuisance. The letter, dated Jan. 17, says that in addition to structures that were already on the property before the spring of 2021, the family has brought new material to the site, including a teepee, a camping trailer and other installations.

It says that unless all structures and materials are removed by March 31, Parks Canada will have them removed and the department will "undertake a cleaning of the site being occupied."

Vautour's son Edmond says the family has no intention of ceding to the latest request from Parks Canada, which has sent eviction letters to the family since his father died.

"To come back months later and do the same thing all over again, I think is harassment," he said in an interview Monday. "My mother is 88 and she received a letter like that, it's not good for her. I think they should stop that until everything is decided in the courts."

He called the Parks Canada letter provocation. "We're doing no harm to nobody," he said, adding: "It's our land and we're going to stay there."

The federal government expropriated houses and other property on New Brunswick's east coast in the early 1970s to create Kouchibouguac National Park.

Lawyer Michael Swinwood of the non-profit organization Elders Without Borders has written to Parks Canada saying the family's alleged "nuisance" pales in comparison to what he called "acts of genocide and apartheid" perpetrated by the government against Indigenous peoples.

"The Vautour family has no intention of vacating their ancestral Indigenous lands. Furthermore, the lands are presently in litigation in Court of Queen's Bench in Moncton," Swinwood wrote.

No one from Parks Canada was available for interview, but spokeswoman Megan Hope issued a statement.

She said Parks Canada had allowed Jackie Vautour to remain on the land provided he stayed within the law and did not use the site as a basis for legal action against the park.

"This provision applied to Mr. Vautour only and not to other members of the extended Vautour family," she wrote. "With Mr. Vautour's passing, this arrangement is also at an end, and it is now time to bring the illegal occupation in the national park to a close."

This report by The Canadian Press was first published Jan. 25, 2022.

Fifty-eight-year-old Vivian Ketchum is set to receive her high school diploma at a graduation ceremony at the University of Winnipeg next month. It is a moment that is decades in the making.

Students trapped inside a classroom with a gunman repeatedly called 911 during this week's attack on a Texas elementary school, including one who pleaded, 'Please send the police now,' as officers waited more than an hour to breach the classroom after following the gunman into the building, authorities said Friday.

Fragments of a comet broken nearly 30 years ago could potentially light up the night sky Monday as experts predict an 'all or nothing' spectacle.

Transport Minister Omar Alghabra says the federal government is working with groups on the ground to resolve air travel 'bottlenecks' in time for a busy summer.