Rebirth of a 'sleeping' language: How N.S. is reviving its Gaelic culture 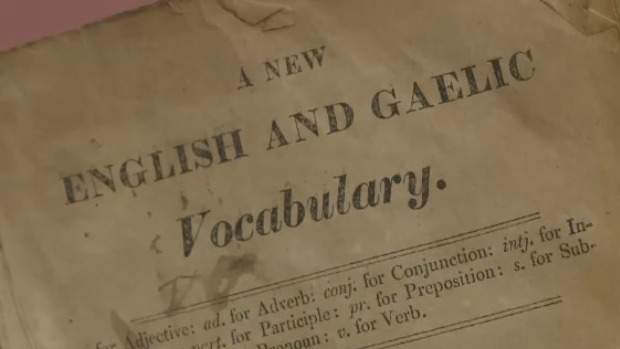 This 200-year-old Gaelic/English dictionary will be on display in Pictou County.

The number of native Gaelic speakers in the province has been declining for decades. But Frances MacEachen, a community development officer with the office, said organizations that promote Gaelic culture are helping to awaken a new generation's interest in their history, not unlike the province's Mi'kmaq and Acadian communities.

"They're not dead, they're sleeping languages," she said in an interview Monday.

The office has announced more than $40,000 will go to nine non-profit organizations for projects dedicated to the advancement of everything Gaelic, from playgroups to language immersion classes.

Its website says nearly one-third of Nova Scotians can trace their roots to Gaelic-speaking migrants who settled in the province starting in the late 1700s from the Islands and Highlands of Scotland.

MacEachen, who grew up in Cape Breton among Gaelic-speaking parents, said people of all ages are becoming increasingly interested in reclaiming that heritage and learning to speak the language.

But she admits not everyone appreciates the value.

"People do think we're trying to revive something that belongs in the past," said MacEachen, who speaks Gaelic with her colleagues in the Cape Breton hamlet of Mabou.

"But people who make those comments don't understand the interest in the language and culture and how it brings people together and how it attracts people to our province."

The office said census data indicates the number of Gaelic speakers in Nova Scotia rose to 1,275 in 2011 from 890 in 2006. In 2011, 300 people identified Scottish Gaelic as their maternal language.

Later this month, more than 100 young people will descend on Englishtown, a small community overlooking St. Ann's Bay, to take part in language, song and drama programs at the Gaelic College. The institution bills itself as the only institution in North America that offers year-round Gaelic programming, including lessons in highland dancing, fiddle playing and weaving.

"I truly believe in my heart that had we done this 100 years ago, 50 years ago, the economy of areas of like Cape Breton Island would have been positively impacted," said MacDonald, a former Nova Scotia premier who created the Office of Gaelic Affairs.

"When people feel a connection to who they are and to their communities, they want to stay and they want to make a difference."

Though Gaelic is the founding language of Scotland - spoken particularly by the Highland clans - it originated in Ireland. Today, Scottish Gaelic is spoken in Scotland, Canada, the United States, Australia and New Zealand. Other Celtic languages include Irish and Manx, which is spoken on the Isle of Man in the Irish Sea.

Shay MacMullin, a language teacher and self-described Gaelic advocate, recently helped organize a two-week tutor-training and immersion program through the Whycocomagh and District Historical Society. The organization is among the nine to receive government funding.

MacMullin said her grandfather was a native Gaelic speaker who had no choice but to assimilate and speak English as a schoolboy in Nova Scotia. As a result, the language wasn't passed down.

The Gaelic culture is much more than just language, she said -- it's songs, dance, stories and food.

"I really feel like Gaelic is my first language and I just didn't get it first," said MacMullin, 39, who learned the language seven years ago.

"All Gaels should have an opportunity to reconnect and reclaim their birthright which is speaking their language and recognizing their identity, and being able to feel proud of that."