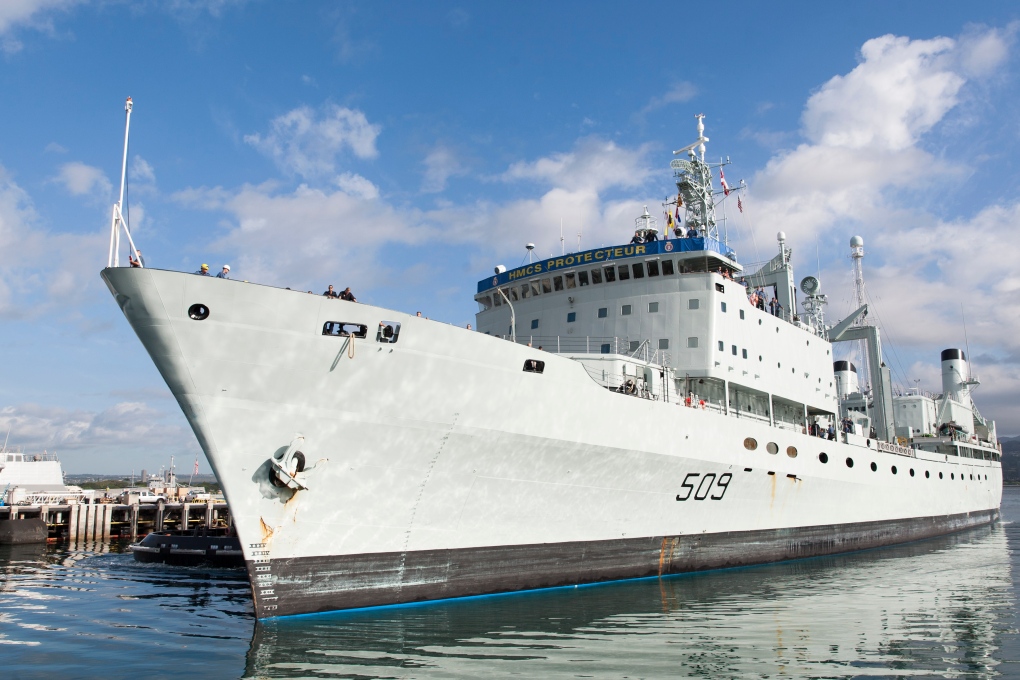 The Royal Canadian ship HMCS Protecteur is towed into Joint Base Pearl Harbor-Hickam after suffering an engine fire aboard the ship while at sea in Honolulu, Thursday, March 6, 2014. (AP / Marco Garcia)

LIVERPOOL, N.S. -- After a storied career spanning half a century, a former Royal Canadian Navy workhorse is winding up its final seven-week journey, sailing towards its own dismantling on Nova Scotia's south shore.

The former HMCS Protecteur carried more than 10,000 sailors over 800,000 nautical miles in its time, including service in the 1991 Gulf war.

Now de-commissioned, it left its home base in Esquimalt, B.C., on Feb. 24 and was towed south through the Panama canal before beginning its final leg north to Liverpool, N.S., expected to arrive this week.

The 172-metre long supply ship will meet its end, coincidentally, in the hometown of a family closely connected to the ship, including the high ranking officer who once commanded her as head of Canada's Pacific Naval Fleet.

"It's a small-world scenario where the ship ends up back in Liverpool, which is where I was raised," said Rear-Admiral Bill Truelove, now the Canadian defence attache to the United States based in Washington, D.C.

Truelove said he gained an affinity for the vessel because of his family's connection to it -- his father Larry served three years as the deck officer on the ship and his two brothers Brian and Peter travelled aboard the vessel as high school students during its annual voyage to the Arctic.

But his interest is mainly the result of his involvement in the decommissioning of Protecteur after 46 years of service, following a crippling engine-room fire off the Hawaiian Islands in February 2014.

At the time of the fire the ship was on its own and without power in the middle of the ocean as the crew beat back a blaze that burned for several hours and sent thick dark smoke billowing from its stacks.

Truelove said the ship's crew persevered under the "worst conditions you can imagine" in fighting the fire.

"That's a very significant chapter of my life during my time as the commander on the West Coast," said Truelove. "For me this was almost a full-time commitment over many months from the first phone call I got on the fire to seeing the entire ship's company safely back."

The Protecteur was decommissioned during a ceremonial farewell in May 2015 attended by more than 100 former crew members and its last crew.

Before transferring to the West Coast in 1993, Protecteur regularly served as part of NATO's standing fleet in the North Atlantic.

The ship served in the 1991 Persian Gulf War and in the Arabian Sea in 2002 during the Afghan war, earning battle honours for both deployments. The vessel was also part of hurricane relief missions in Florida and the Bahamas in 1992.

Larry Truelove, who retired near Liverpool after 37 years in the navy, said Protecteur's imminent arrival is seen as good news to a community that has experienced a lack of jobs since the closure of the Bowater Mersey mill in 2012. The dismantling is expected to create 30 to 40 jobs, according to the municipality.

Truelove has fond memories of his time in the navy and of the ships he sailed on, but he takes a practical view when it comes to Protecteur's demise.

"It's always sad to see a ship broken up, but it served the country well," he said. "It's getting tired like the rest of us, is the expression I use."

Nova Scotia company R. J. MacIsaac won a $39 million federal contract to break up the Protecteur and the former HMCS Algonquin in January.

-- By Keith Doucette in Halifax