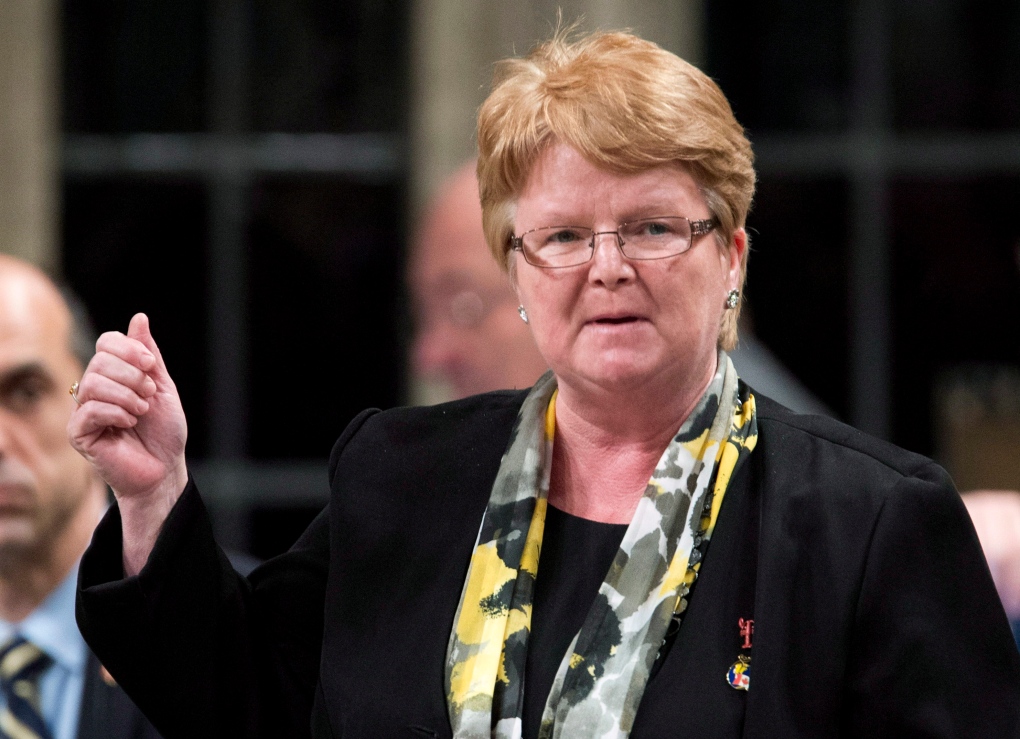 National Revenue Minister Gail Shea responds to a question during question period in the House of Commons Wednesday December 5, 2012 in Ottawa. THE CANADIAN PRESS/Adrian Wyld

Shea announced the deal in January 2011 in Beijing, saying that gaining access to the world's most populous country would breathe new life into an industry crippled that year by a new European ban on seal products.

At the time, representatives of the Canadian sealing industry said a cache of seal meat had already been packaged and was ready for shipment to China.

But the Chinese government later said it had called for a review of the deal, which has remained stalled ever since.

Shea is now blaming the animal rights movement for pressuring the Chinese government to back away from the deal over concerns the Canadian seal hunt is inhumane.

"Part of the thing that's holding it up is that animal rights groups put a lot of pressure on there as well, on the Chinese," she said in an interview Sunday.

"We have to keep telling the world that this is a sustainable hunt. It's a humane hunt."

Organized groups opposed to the sealing industry have succeeded in spreading misinformation about the slaughter of "baby" seals, a practice that was banned in the 1980s, the minister said.

"People are not running around out there with hakapiks killing seals willy-nilly," she said, referring to the spiked clubs used mainly by seal hunters from Quebec's Iles-de-la-Madeleine in the Gulf of St. Lawrence.

"This is well-regulated. More than 90 per cent of the seals are actually killed by high-powered rifles."

The International Fund for Animal Welfare has been campaigning to end the hunt since 1969. Although the group has an office in China, its director of Canadian wildlife said it doesn't have as much influence as Shea would like to believe.

"Looking back at the record, it looks like the Canadian government has been promising Chinese markets for seal products since at least 1985," Sheryl Fink said in an interview Monday. "It's just not a product that people want to buy."

As well, Fink said the Chinese public is aware of what happens in Canada's commercial seal hunt largely because of work done by home-grown animal welfare groups, not Canadian interlopers.

"People are becoming more aware on their own now," she said. "People (in China) have Internet access and can see what's happening for themselves."

As for misinformation about seal pups, Fink said while it's true that two-week-old harp seals with white coats are no longer hunted, she said it's also true that newly weaned grey-coated harp seals as young as 25 days old make up the bulk of the seals killed each year.

"People don't care whether it's a two-week old seal or a three-week old seal, whether the fur is white or silver," she said. "A lot of people consider any animal under one year of age to be a baby."

Patricia Williams, resource manager at the federal Fisheries Department, said 37 vessels indicated Monday they planned to participate in the hunt. This year's harp seal quota has been set at 400,000, she said.

The sealing industry represents a small portion of the fishing sector in Atlantic Canada and Quebec. But the annual hunt looms large on the political landscape in Newfoundland and Labrador, where the vast majority of the country's registered seal hunters live.