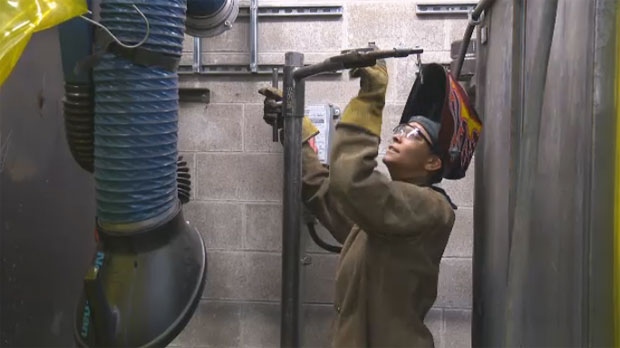 Welding students at NSCC say they optimistic about their future, following the shipbuilding announcement last year.

When the federal shipbuilding contract was first announced in October, 2011 there was a great deal of excitement about the trickle down effect.

Nearly every industry was abuzz about the possibilities that could arise from consumer confidence.

One year later, the initial ‘boom’ seems to have died down, but there has been substantial change in some areas.

Students in a welding class at the Nova Scotia Community College Waterfront Campus in Dartmouth say they have never felt more secure in their futures.

“You’re pretty much guaranteed a job if you get your red seal,” says NSCC student Andrew Trifts.

That confidence has made for a very busy year at the NSCC.

“We’ve developed a number of new programs. We’ve actually increased the enrolment in some particular programs and we have changed and actually recalibrated some space,” says NSCC president Don Bureaux. “So, we have actually done a number of construction projects to get ready for the future demand.”

The boom effect can be felt in other industries as well, especially the real estate market.

Realtor Sandra Pike says she saw a dramatic jump in sales in the months following the shipbuilding announcement. She says it lasted about six months.

“The ‘big boom’ and then we just tapered off,” says Pike. “So, we’re in a balanced market right now.”

It has balanced out to roughly a five per cent increase in sales this year, which is fairly typical in the Halifax area.

There has also been a five per cent increase in price, which was also expected.

Holly Flemming has bought and sold four times in the past four years. She says she has seen a change in the market.

“The prices have gone up, however, I don’t think that they’re inflated,” says Flemming. “I just think that people have started to realize the value of their own property.”

The Nova Scotia Homebuilders Association also saw a boom in the beginning.

Phones were ringing off the hook – many calls coming from Maritimers who had moved to Alberta, wanting to come back home.

One year later, the phones are still ringing. But the callers aren’t as confident.

“I think now that has sort of morphed into a cautious optimism,” says Paul Pettipas, chief executive officer of the Nova Scotia Homebuilders Association.

“People want to see the bricks and mortar on the ground. They want to see something happening…and I think that’s where we are now. It’s positive, yet it’s very guarded.”

There is a similar feeling at car dealerships, which saw a spike in sales, followed by a settling six months later.

“There was lot of uncertainty in the media,” says car sales manager Mike Currie. “Were they going to build ships? Were they downsizing the contract? Was it going to happen?”

Still, he says sales are up nearly 18 per cent over the past year.

“The owner of this company has owned it since 1979 and this will be our biggest year in the company’s history.”

According to Irving Shipbuilding, the company boosted the province’s gross domestic product by $174 million in 2011.

“Business confidence jumped so high in Nova Scotia that we actually lifted the entire country in the middle of a recession,” says Brian Rose, vice-president of the Halifax Chamber of Commerce.

The Halifax Chamber of Commerce has launched its own program – All Ships Rise – to prepare its members for what’s to come.

But while confidence may have turned to cautious optimism across many sectors, the confidence is unwavering at the NSCC.

“It’s just a great incentive to get through your two years,” says NSCC student Bobbi-Leigh Cain. “Knowing you can have a career here for the next 15, 20, 30 years, whatever you’d like it to be.”