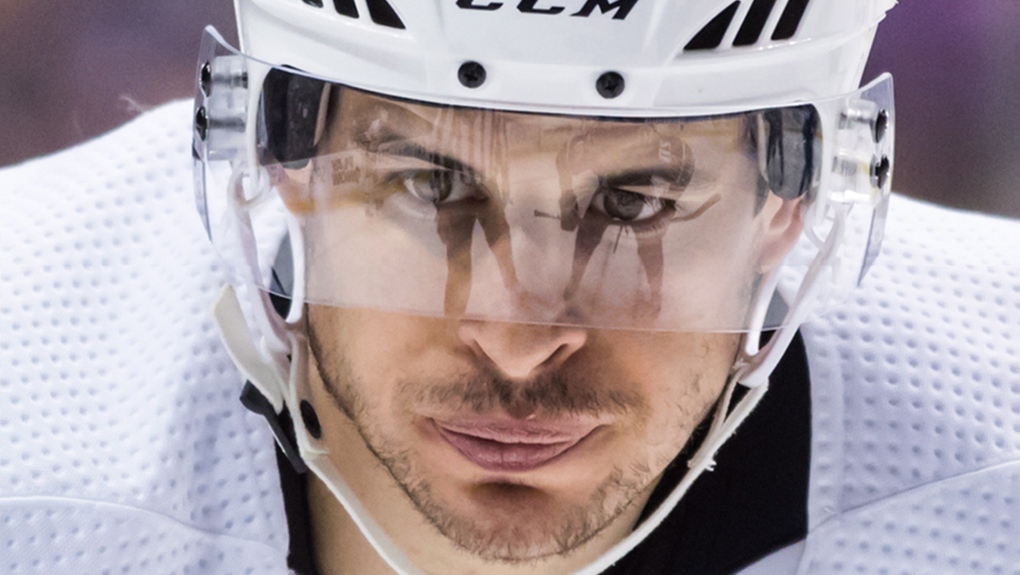 Pittsburgh Penguins' Sidney Crosby lines up for a faceoff as Vancouver Canucks' Brandon Sutter is reflected in his visor during the third period of an NHL hockey game in Vancouver, on Saturday October 27, 2018. (THE CANADIAN PRESS / Darryl Dyck)

HALIFAX -- HALIFAX -- One of hockey's greats is giving his jersey number's worth in new sets of equipment to programs for young players in his home province who don't have easy access to the game.

Sidney Crosby recently teamed up with sponsor and equipment maker CCM to announce a donation of 87 sets of hockey gear to participants in three programs administered by Hockey Nova Scotia.

The programs promote inclusion in hockey for black youth, female Indigenous players, and for new Canadians.

Amy Walsh, executive director of Hockey Nova Scotia, said the donation was the result of an ongoing conversation with Crosby's agent, his parents and his charitable foundation.

"It's really about giving access to kids who are usually unable to access the funds required to participate in the game," said Walsh. "Ironically enough the 87 number was exact when you combine the three program's needs, so it worked out perfectly."

Walsh said Crosby surprised eight representatives of the programs with the new gear during a special video link up last week and his parents, Trina and Troy Crosby, were on hand to help distribute the equipment.

The rest of the equipment will be ordered in the new year once it's been sized for the participants in the programs.

Walsh said the new Canadian program in particular has a wait list of participants and there is a shortage of equipment.

"When (Crosby) heard that, he thought it was really important to pick that program," Walsh said.

In it's third year, the new Canadian program currently has 50 kids receiving instructions in the basics of hockey. Many are from Syrian refugee families and the program uses volunteer translators provided through the Immigrant Services Association of Nova Scotia.

The kids get one hour of instruction each week and officials hope to expand that to two sessions next season.

"They love skating and stick handling and have learned very quickly how to skate," program lead Brad Taylor said in an email. "Most, if not all, have never been on skates before or have seen hockey."

Walsh said although various hockey associations in the province have programs to ensure extra gear gets to kids who need it, her organization doesn't have the resources or capacity to run an equipment bank for players.

It's something she says is a challenge across the country, so having equipment donations such as Crosby's can only help.

"I wanted to be sure they (players) had the best experience learning the game," Crosby said in a Hockey Nova Scotia news release. "Having the right equipment is the first step to getting stared."

This report by The Canadian Press was first published Dec. 15th, 2019.