A man shovels snow at the Federal Building on Highfield Street in Moncton, N.B., on Jan. 4, 2018. (Stephen MacGillivray / THE CANADIAN PRESS)

HALIFAX -- A spring storm will move up from Cape Cod into the Bay of Fundy by early Friday morning. From there, it will move into the Gulf of St. Lawrence by Friday night.

The passage across the Maritimes will bring a combination of heavy snow, rain, high winds, and a risk of coastal flooding. Heavy snow or a mix of snow and rain develops across the Maritimes Thursday evening.

Weather conditions will deteriorate Thursday evening and night. With falling temperatures, most areas in the region will pick up some snow accumulation, with the heaviest snowfall expected in New Brunswick and western P.E.I.

Much of Nova Scotia will see at least some snow before a turn to rain and showers. Snow is expected to accumulate more for northern and eastern areas of Nova Scotia. Rain will generally total 10 to 20 mm for that province. 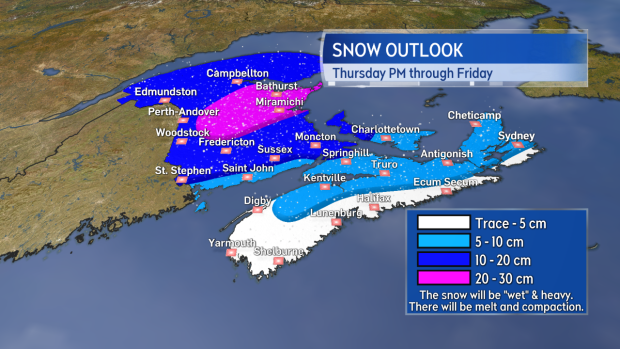 The most snow accumulation looks likely for New Brunswick and western P.E.I. Both provinces have Snowfall Warnings in place.

The nature of the snow will be wet and heavy in most cases. Should this collect on branches and power lines, the weight may increase the risk of power outages. This would be especially true for northeastern New Brunswick, where some of the higher snow amounts are forecast.

Wind will increase Thursday evening. Easterly gusts of 70 to 90 km/h are expected for the Bay of Fundy coastline in New Brunswick and the Atlantic coastline of Nova Scotia. Due to the topography of the Highlands, northern Inverness County will likely hit gusts exceeding 100 km/h by early Friday morning. The strongest coastal winds will turn to the southwest on Friday but continue to peak 70 to 90 km/h. Wind will gradually diminish Friday evening and night. 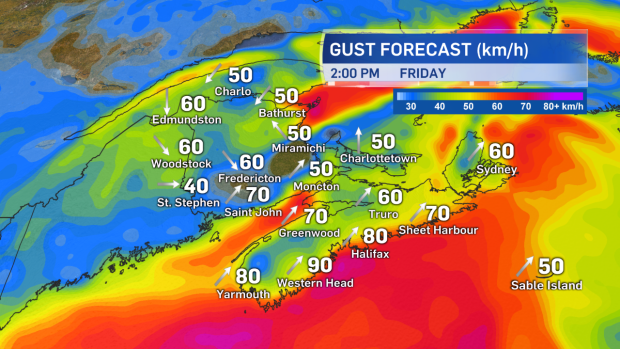 The atmospheric pressure fall and strong onshore winds will line up with occurrence of high tide for stretches of the coast Thursday night and Friday. The combination is likely to lead to water levels exceeding typical high tide marks.

A rough and pounding surf will further increase the risk of coastal flooding. Storm Surge Warnings have been posted for the Bay of Fundy coastline in N.B. and Digby/Yarmouth Counties in N.S. for a flooding risk both late Thursday and near noon on Friday.

Another Storm Surge Warning is posted for the Bay of Chaleur and Acadian Coast in N.B. for a flooding risk Friday morning. 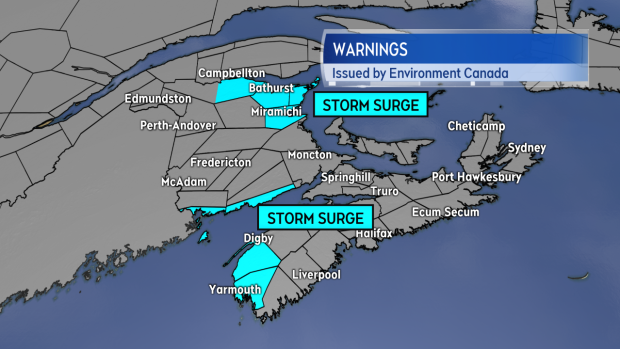 Storm Surge Warnings are in effect for coastal areas of N.S. and N.B. The greatest risk of flooding will come at high tides. Those occur both late Thursday, Friday morning, and near noon Friday dependent on location.

Some disruption to travel services is expected due to the storm. Bay Ferries and Marine Atlantic have already posted advisories. Given the strong winds in the forecast, both the Confederation Bridge and the Halifax Bridge Commission should be watched for restrictions on vehicle-type passage.

It will be a stormy start to the Easter long weekend, but improved weather is in the forecast for Saturday and Sunday.