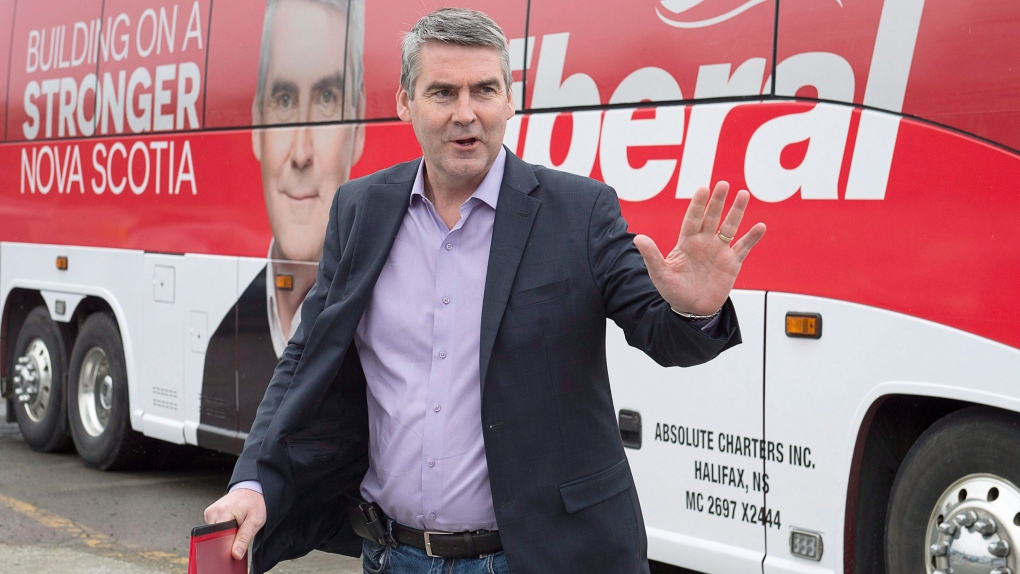 Nova Scotia Premier Stephen McNeil arrives for an infrastructure announcement as he campaigns in Halifax on Monday, May 1, 2017. The provincial election will be held Tuesday, May 30. (THE CANADIAN PRESS/Andrew Vaughan)

HALIFAX -- Nova Scotia's Tories and governing Liberals traded barbs Tuesday over their treatment of female candidates, leaving the third party NDP an opening to point out it alone has almost achieved gender balance in its slate.

"I'm pleased they've realized this is a major matter ... and I'm glad it is something they've decided to attend to," NDP Leader Gary Burrill said in an interview, after pointing out 24 of his party's 51 candidates are women.

Accusations over the lack of women candidates erupted on Day 1 of the campaign, as Premier Stephen McNeil responded to questions about why only 12 of the party's 51 candidates for the May 30 election are women.

He said his government has a track record for appointing women to positions of power, and he accused the other parties of choosing female candidates to contest ridings they're unlikely to win.

"It's one thing for parties to go out and identify people to run in ridings that they don't think they have a great shot in" McNeil said during a campaign stop. "It's quite another when you actually go out and get them elected and put them in the house of assembly."

The premier said his party "has stood beside women to have them elected in meaningful ridings."

As well, McNeil's government had six female cabinet ministers, the highest number of any government in the province's history.

"When he said some women that are running aren't making a meaningful contribution, he needs to be accountable for that," Baillie said in an interview.

Ginny Hurlock, the Tory candidate running against McNeil in the riding of Annapolis, said the premier's comments were ill-advised.

"And to think of ridings as being meaningful and not meaningful is just nonsense," she said.

Women make up a third of the Progressive Conservative candidates.

However, Baillie promised that if elected his party would increase subsidies to political parties if they nominate female and minority candidates.

"I think it's important that all party leaders acknowledge there is more work to do on gender balance and representation in the legislature from African Nova Scotians and aboriginal Nova Scotians ... The per vote subsidy would increase by 50 per cent in those ridings," he said.

Baillie also defended himself against criticism his party is far from fielding a slate that represents gender and ethnic groups in the province.

"It's more than we've ever had, and they're running in ridings across the province," he said.

Burrill said his party has long had internal financial incentives to promote female candidates. The party also requires local districts to send a woman and a man to its governing executive, and it has internal rules requiring searches by electoral districts for female and minority candidates.

"This is not something left to chance," he said. "It's part of our deep self understanding."

As for McNeil's remarks, Burrill suggested McNeil withdraw them and offer an apology.

Speaking at a news conference Tuesday, McNeil said he may have lacked "eloquence" in his original explanation, but he did not apologize for his remarks.

"One of my proudest moments was when I had the opportunity to appoint the first woman of Mi'kmaq descent to the bench," he said.

Cabinet ministers Joanne Bernard and Kelly Regan joined the premier for his news conference, with both stating that he'd been supportive of their political careers.

"We've had opportunities we might not have had under another leader ... We've been supported every step of the way by this premier," said Bernard.