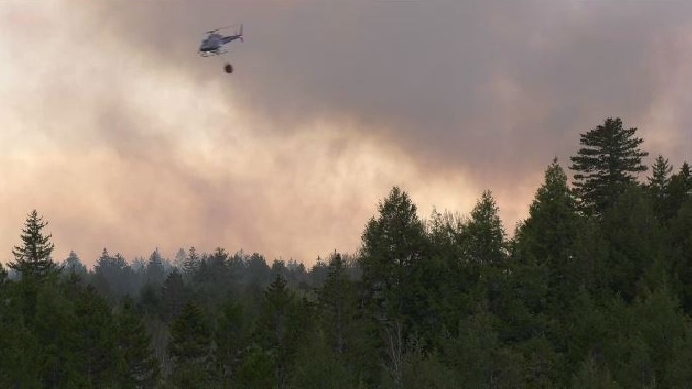 A helicopter from the Nova Scotia Department of Lands and Forestry flies over a forest fire near Chester, N.S. (CTV ATLANTIC / JIM KVAMMEN)

HALIFAX -- Twenty fire departments from three counties have been called on to battle a forest fire that is raging near Chester, N.S. on Friday night.

Firefighters say that at least one building is also on fire.

The fire was reported just after 5 p.m. to the Chester Fire Department.

Sixteen departments were on the scene Friday night and four departments are on standby to offer more support.

Fire fighters also getting support from the air as a Lands and Forestry helicopter was dropping water from above trying to stop the fire from claiming more woodlands.

The helicopters were scooping water from the Stillwater at the end of our lake :O Grim Photography

Evan Dahl, a firefighter and dispatcher who runs a Facebook Group called Dahl Dispatch, was following the fire and posting updates to his page.

CHESTER GRANT FOREST FIRE UPDATE: As night approaches, fire crews are pulling out of the woods for tonight as it is...

The RCMP closed off the road going southbound on Highway 12 near Chester Basin at Rafuse Drive.

People are being asked to avoid the area.

It is unknown on what caused the fire, if there are any injuries or what if anything has been destroyed.