Undersea canyons with multicoloured coral off N.S. getting special protection 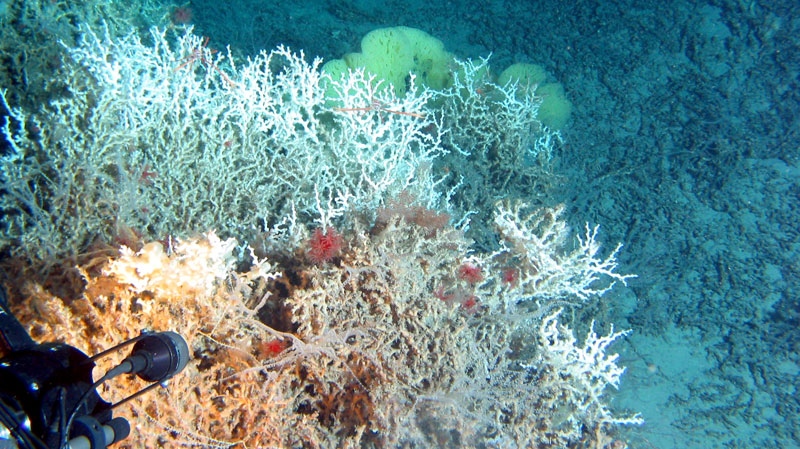 In this undated photo, a deep sea coral reef is seen from a four-man submersible more than 1,000 feet down in the Atlantic Ocean about 50 miles off the southeastern coast of the United States. (AP / arthowardphotography.com)

HALIFAX -- In a dark corner of the Atlantic Ocean, amid a pair of steep-sided canyons far off the southwest coast of Nova Scotia, there's a welcoming home for schools of fish decorated with coral so colourful its official name is bubblegum.

Before the end of this year, the two canyons -- Georges and Corsair -- will be declared off limits to fishermen who use gear that is dragged or dumped on seabed, the federal Fisheries Department announced Monday.

"These are globally known as sensitive and important areas," federal oceans planner Derek Fenton told a news conference at the Bedford Institute of Oceanography.

The so-called bottom-contact gear is deadly to corals, which are among the largest invertebrate creatures on the planet.

In total, more than 9,000 square kilometres of ocean bottom will be protected under the Fisheries Act, effectively banning the use of otter trawls, lobster and crab traps, and anchored gill nets and long lines.

"What we're trying to protect is the homes ... that these fish live in," said acting regional manager Carl MacDonald. "We try to draw the areas as small as we can, but we want to protect the key feature, which is the corals."

The new restrictions will also apply to a 49-square-kilometre area called the Jordan Basin, about 100 kilometres west of Yarmouth. The area is also known as "the rock garden," where multicoloured seacorn coral flourishes.

The basin also features a large assortment of anemones and sponges, creating a multi-hued carpet that stands in contrast to the grey, barren depths that represent much of the ocean floor.

And, yes, both seacorn and bubblegum coral look strangely like their namesakes.

"Many people don't even know that we have cold-water coral off of Nova Scotia -- and this is something we've been working on for two decades," said Susanna Fuller, marine conservation co-ordinator with the Halifax-based Ecology Action Centre."

"It's exciting progress toward recognizing that cold-water corals are an important part of our biodiversity. When I used to interview fisherman about why they're so important, they would say, 'It's just like a moose needs trees.' That structure on the sea floor is very important."

Despite the new restrictions, Fenton said the number of fishermen affected by the closure is small and the level of economic impact will be minimal. In all, only seven lobster fishermen will be affected in an area of Nova Scotia where there are about 1,000 lobster licences.

Federal officials say that from 2011 to 2015 the value of commercial landings by bottom-contact fisheries within the two sensitive areas was below $300,000 annually, which was less than 0.1 per cent of the total annual value of all commercial fisheries in the Maritimes region.

"We worked out what would be the best boundaries to have minimal economic impact but still protect what we need to protect, and that's the habitat and the corals," MacDonald said. "We're protecting homes for the future."

Other types of fishing will be allowed to continue, including the swordfish and tuna fisheries.

More than two dozen species of corals are found in the waters off Nova Scotia. Deep-water varieties that reach a metre in length can be more than 100 years old.

Aside from providing shelter for fish, these animals help create diverse ecosystems that offer food for a large variety of species.

The two newly protected conservation areas were explored in 2014 by U.S. and Canadian researchers using a remotely operated submersible that would dive up to two kilometres beneath the surface.

Stunning video images recorded by the submersible show a school of pollock darting in and out of the colourful corals while a nearly translucent octopus looks on.

Fenton said neither area is likely to see any oil and gas exploration or development. The canyons lie southwest of Georges Bank, a rich fishing ground that spans the Canada-U.S. border and has long been protected by a moratorium on offshore drilling.

That moratorium remains in effect until 2022.

As well, Fenton said the Canada-Nova Scotia Offshore Petroleum Board has been made aware of the sensitive nature of these areas, among six now found in the Atlantic region.

"Long before there would be any actual oil and gas activities, they would be flagged as having great importance," he said.

In 1992, Canada committed under the Convention on Biological Diversity to protect 10 per cent of its marine areas by 2020. So far, the list of protected areas has reached about one per cent or about 50,000 square kilometres, Fenton said.