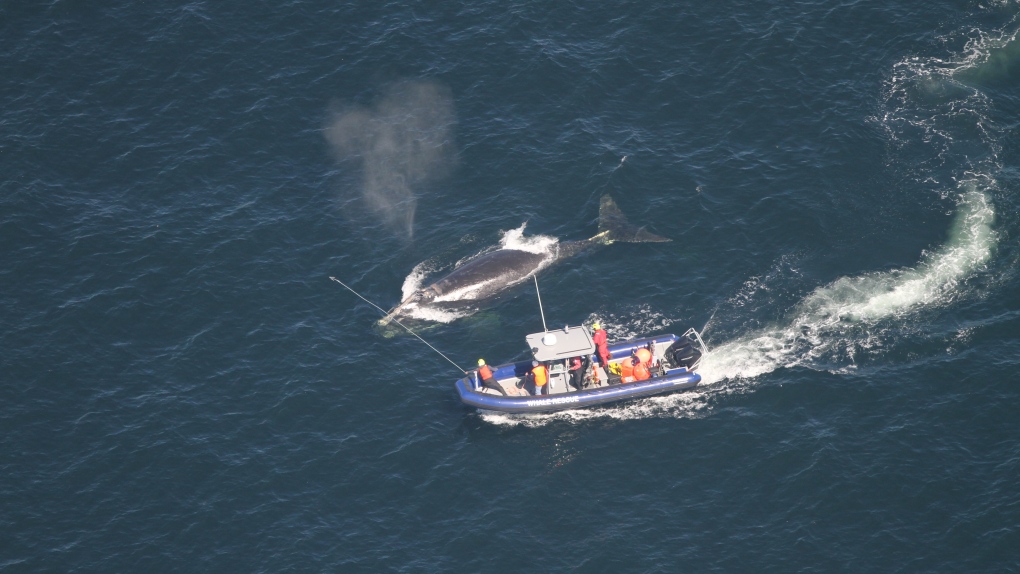 Crew members attempt to disentangle a whale in the Gulf of St. Lawrence in a handout photo. Efforts to free some endangered, entangled North Atlantic right whales continue, weather permitting, according to the federal government. (THE CANADIAN PRESS/HO-Alison Ogilvie, NOAA Fisheries)

MONCTON, N.B. -- Over three days, federal fishery officers and the Canadian Coast Guard will comb the waters of the Gulf of St. Lawrence for lost fishing gear in an effort to protect the endangered North Atlantic right whale.

In an operation that got underway today, officers from Atlantic Canada and Quebec aboard five coast guard vessels will search areas of the gulf with the highest reported gear loss.

The vessels are supported by a coast guard helicopter and conservation and protection surveillance aircraft to help locate the so-called "ghost gear" floating on the surface.

The operation will take place during daylight hours through Saturday, with the retrieved gear unloaded at various locations at the end of each day.

Reporting lost fishing gear has been a licence requirement for all fixed-gear fisheries in the Gulf of St. Lawrence since 2018.

North Atlantic right whales number only about 400 worldwide, and in the last few weeks six have died in Canadian waters.