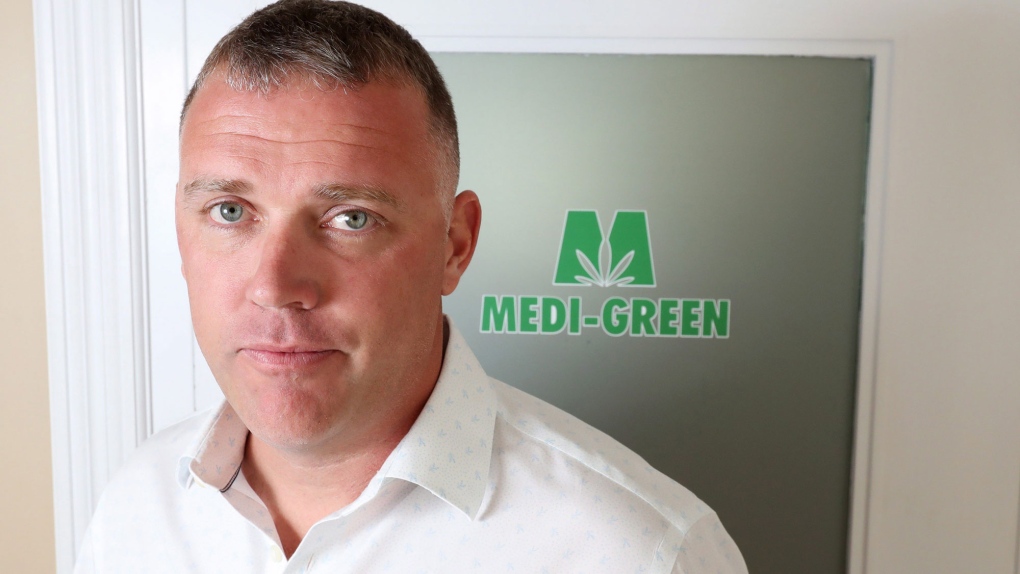 Trevor Hands, the founder of Medi-Green, poses for a portrait at the head office in Perth, Ont., on Saturday, Sept. 3, 2016. When he opened a medical marijuana shop in Kingston earlier this year, Hands had little idea who his customers would be, how much they would buy or how his business would grow simply through word of mouth. He does now. (THE CANADIAN PRESS/Lars Hagberg)

OTTAWA -- When he opened a medical marijuana shop in Kingston earlier this year, Trevor Hands had little idea who his customers would be, how much they would buy or how his business would grow simply through word of mouth.

Business is booming for Hands, thanks in large part to an influx of business from a single demographic: former Canadian Forces soldiers.

A review of Veterans Affairs Canada data on medical marijuana users, obtained by The Canadian Press under the Access to Information Act, suggests the number of users has grown most dramatically in those parts of the country where marijuana shops and clubs cater to a local population of military veterans.

Are those businesses simply meeting demand -- or creating it?

Usage rates -- and the commensurate federal costs -- are generally higher in those areas where the stigma and barriers to medical marijuana use have been lowered or eliminated, said Zach Walsh, a University of British Columbia psychology professor.

Marijuana clubs and shops play a key role in removing those barriers, he said.

"The reason we see higher concentrations in areas where it's promoted is because it gives the individuals with PTSD the opportunity to find out that it works," Walsh said.

Veterans are proving well-educated about the potential benefits of pot, said Mike Southwell, vice-president of Marijuana for Trauma, which helps clients to understand the drug and navigate the federal benefits program that pays for it.

Once cannabis helps one veteran, they tell two others, and so on and so on, said Southwell.

"If a veteran tells another veteran about something that is working for disability, you can be guaranteed that they will tell a hundred other vets."

It's that kind of growth the federal government wants to get under control. The Liberals are expected to announce changes to the medical marijuana program in the coming weeks after years of exponential growth -- and soaring costs.

This year, the program is expected to carry a price tag of $25 million.

In 2008, when the government first started covering the cost of medical marijuana, Veterans Affairs had licensed users in only five so-called "forward sortation" areas, defined by the first three characters of a postal code.

Much of the growth has been around Fredericton, N.B., and its neighbour CFB Gagetown, where soldiers regularly go for training throughout their careers, said Lee Windsor, deputy director at The Gregg Centre for the Study of War and Society at the University of New Brunswick.

Many veterans end up retiring in the area, which could help explain not only why it's home to the largest number of veterans in Canada who are medical marijuana users, but also the region where the costs are highest, he said.

The age of program participants is also interesting, ranging from about 25 years old -- veterans of the war in Afghanistan, presumably -- to 94-year-olds living in the Greater Toronto Area.

The data also suggest that older veterans are prescribed less than their younger counterparts -- likely because younger veterans feel less of a stigma around marijuana use than older ex-soldiers would, Walsh said.

Hands said older veterans tend to smoke their marijuana, which means they don't need large quantities, while younger veterans use cannabis in other ways like in baked goods, demanding larger prescriptions.

Dosages also depend on a former soldier's condition, be it mental, emotional or physical, Southwell said. A client with post-traumatic stress or chronic pain is going to need more cannabis than someone with a less serious problem.

"As well, everyone's chemical makeup is different -- some people require more, while some less. It really depends on the person," he said.

The question of whether cannabis works remains unanswered in the academic literature, Windsor said.

Walsh is hoping to get those answers. He is set to run the first Canadian clinical trial testing the effects of marijuana on veterans with post-traumatic stress disorder.

For Southwell, the benefits are obvious: his clients feel better and have an improved quality of life.

"A price tag can't be put on those results."