Weather update: Snow for some, rain for others A man walks through a walking trail during a snow storm in Fredericton on Sunday, December 27, 2015. (THE CANADIAN PRESS/Darren Calabrese)

As expected, our late week weather system has arrived as a mix of snow and rain for the Maritimes.

The boundary between the snow and rain is currently near Fredericton, with snow to the north and rain to the south. There have been areas in Nova Scotia and Prince Edward Island that have seen some snowflakes mix in with the rain but little accumulation.

Moving through the evening and night the snow-rain line will move south towards the Bay of Fundy coastline and towards Charlottetown P.E.I. Central areas of New Brunswick will see 5 to 10 cm of snow tonight with lower amounts to the north and along the Bay of Fundy coastline. Rain is forecast for Nova Scotia and eastern PEI. Rainfall totals may finish as high as 20 to 40 mm locally. 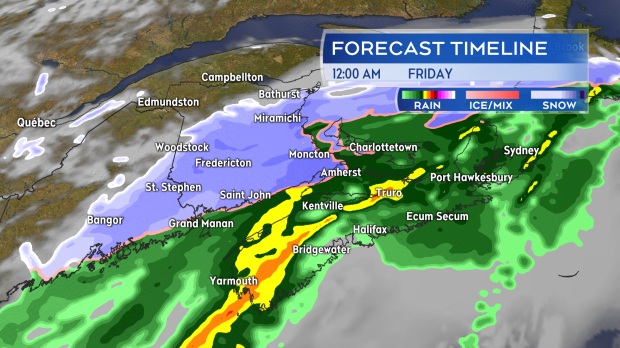 On Friday, snow continues for southern areas of New Brunswick morning and afternoon.

Additional snowfall amounts of 2 to 5 cm for most though parts of the Kennebecasis Valley and near Moncton may see another 5-10 cm. Western parts of P.E.I. may finish with snowfall amounts of 5 to 10 cm. Northern areas of Nova Scotia as well as the Annapolis Valley and Highlands of Cape Breton turn to snow Friday morning and afternoon with a few to several slushy centimetres possible. Travelers through the Cobequid Pass should be aware that the road may become snowy and slippery Friday morning. 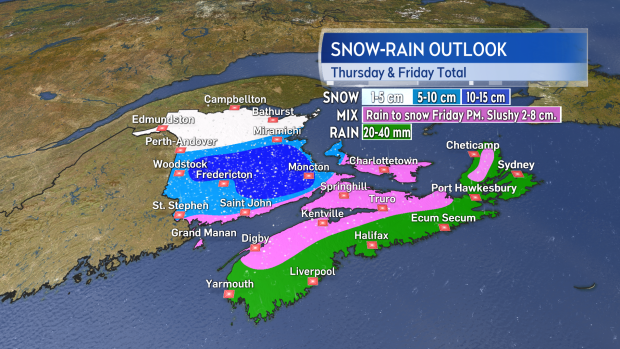 Winds will be gusty but won't match the stronger wind events of the last few weeks. They'll turn to the north and northwest on Friday with gusts 30 to 50 km/h except up to 70 km/h on exposed areas of the coast. Winds will remain blustery into Saturday morning gradually diminishing Saturday afternoon and evening. 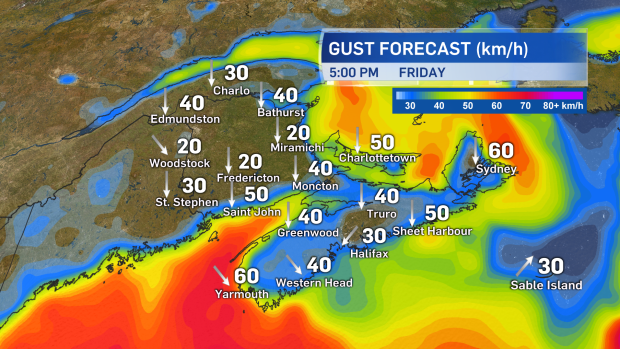 The north and northwest winds will make for a colder weekend ahead.