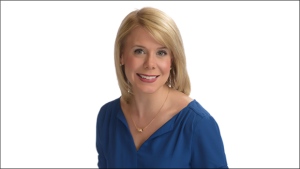 In her five years at CTV Atlantic, Alyse Hand has taken on almost every on-air role in the newsroom.  From writing and reporting to anchoring and hosting, Alyse approaches each challenge with the same eagerness and determination.

These days she can be found at the CTV Weather Centre, providing up-to-date forecasts for CTV Morning Live, CTV Noon News and CTV News Channel. She also fills in as the CTV Atlantic weather anchor on both the CTV News at Five and Six.

Alyse was born and raised in Bedford, N.S. She studied at Dalhousie University and Acadia University before settling in at Nova Scotia Community College to pursue broadcast journalism. Alyse graduated with high honours and was the valedictorian of her graduating class. During her time at NSCC, Alyse earned an award recognizing her investigative journalism skills for a documentary she produced on pesticide use on Prince Edward Island.

Alyse completed her studies at NSCC while working full-time as a television host and producer. In 2010, she was hired at CTV Atlantic where she began reporting. She has also taken on an active role with many of the charitable events supported by CTV, including the IWK Telethon and Christmas Daddies.

A Halifax tour guide for most of her teens, storytelling has always been a passion for Alyse.  She is also a proud Maritimer, taking great pride in sharing the trials and triumphs of people from our region.

When she isn’t working in the CTV Weather Centre, Alyse can typically be found spending time with her friends and family, running and exploring the community she has always called home.