At least part of Yarmouth ferry's sailing could be salvaged: official 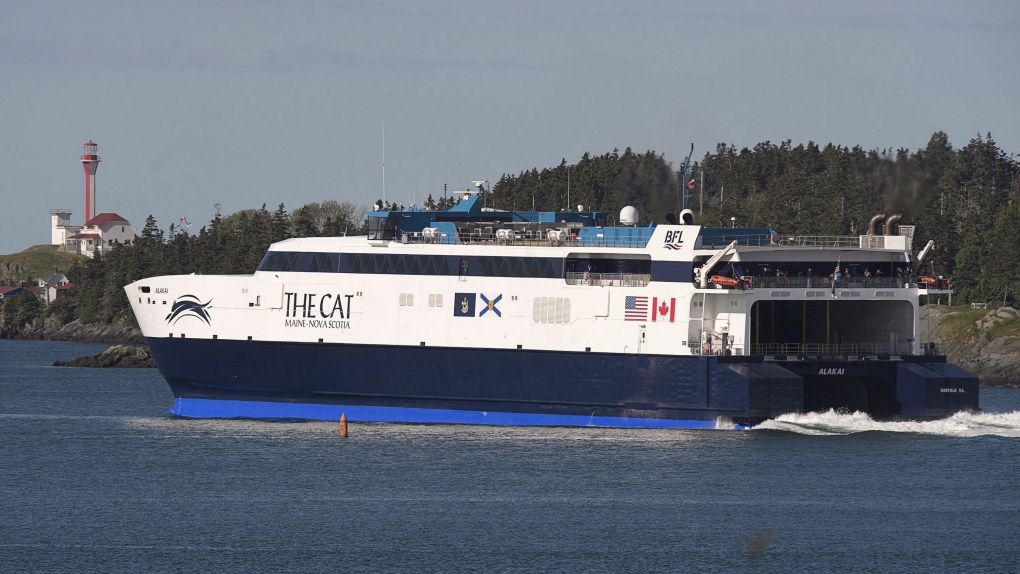 The CAT, a high-speed passenger ferry, passes the Cape Forchu Lighthouse as it departs Yarmouth, N.S. heading to Portland, Maine on its first scheduled trip on Wednesday, June 15, 2016. A spokesman for U.S. Customs and Border Protection says there's a chance the ferry service linking Nova Scotia with Maine could salvage part of its delayed sailing season. (THE CANADIAN PRESS/Andrew Vaughan)

HALIFAX -- A spokesman for U.S. Customs and Border Protection says there's a chance the ferry service that links Nova Scotia with Maine could salvage part of its delayed sailing season.

However, spokesman Michael McCarthy said Tuesday it's up to Bay Ferries to ensure the terminal in Bar Harbor, Maine, is in compliance with the federal department's standards -- and that could take some time.

"Generally, these types of projects take 12 to 18 months," McCarthy said in an interview from Boston. "That time frame was shared with the ferry operator going back to at least 2017."

The company took over the Bar Harbor terminal in February.

"We do not set the start date for the ferry," said McCarthy. "However, it cannot open, and the ferry service cannot begin until CBP has been provided with a compliant facility."

He said the department requires special materials for construction of the booths officers will work in, and the process for ordering that material can take more time than for a regular construction project.

"There's still much work that needs to be done," he said. "We understand the importance of the ferry service, both to Bar Harbor and to Nova Scotia ... (but) it is a tight time frame."

Getting the terminal ready for operations is a top priority for U.S. Customs and Border Protection, he said.

The heavily subsidized service was supposed to start offering trips between Yarmouth, N.S., and Bar Harbor on June 21 -- but the start date has been pushed ahead twice.

Last week, Bay Ferries announced that all reservations prior to and including July 18 would be cancelled.

On June 20, Nova Scotia's Business Minister Geoff MacLellan said the entire season was thrown into doubt with the latest announcement.

Meanwhile, the province has confirmed it recently hired David Wilkins, a former U.S. ambassador to Canada, to lobby U.S. officials on the province's behalf. Wilkins fee is about US$10,000 a month.

Bay Ferries has said the opening of the season is dependent on the "ongoing approvals process."

The province has already committed an estimated $8.5-million to help with the renovation work in Bar Harbor. As well, the ferry's operating subsidy for this year is $13.8-million.

As for the subsidy while the service is idle, the province will continue to pay operating costs and a management fee to Bay Ferries.

When Bay Ferries announced it was moving its Maine port from Portland to Bar Harbor earlier this year, it said the switch to the shorter route would reduce fuel costs.

Nova Scotia's Liberal government has argued the subsidy is essential to support tourism and the struggling economy in southwestern Nova Scotia.

NDP transportation critic Susan Leblanc has said that if the ferry does not sail this season "it will be the pinnacle of Liberal incompetence: massive corporate handouts, with no guarantee of the services Nova Scotians need."

"The lack of details from the Liberals on what kind of penalties the company will face for failing to provide the service is deeply troubling," Leblanc said in a recent statement.