Bids sought for study on how to protect Chignecto Isthmus from rising seas, storms 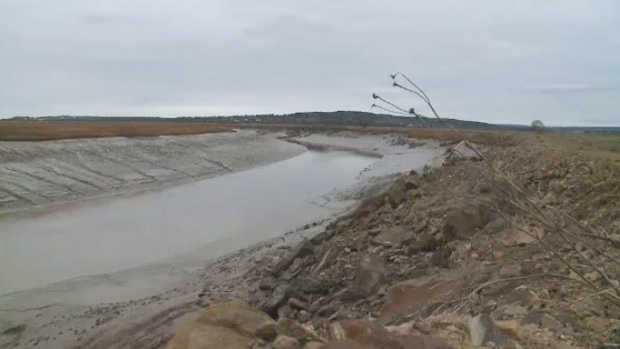 Dikes at the Nova Scotia-New Brunswick border are seen in this undated file photo.

HALIFAX -- A long-awaited process is underway to find ways to protect a narrow and vital corridor of land between New Brunswick and Nova Scotia from floods caused by sea level rise and storm surges.

The request for proposals issued Monday asks firms to bid on the right to do an "engineering analysis and feasibility assessment of potential solutions" to protect the low-lying, 20-kilometre band of land between Amherst, N.S., and Sackville, N.B.

The document says the ultimate goal is for the successful proponent to propose three different options for "viable and resilient engineered solutions" to retain the roads, dikes and infrastructure on the Chignecto Isthmus, taking climate change into account.

According to the document, work on the feasibility study is anticipated to begin around Oct. 7 and be completed by Feb. 12, 2021.

It says the "vulnerability" of the area -- considered one of Canada's most important transportation and trade links -- "results from the fact that the Isthmus of Chignecto is only slightly above sea level. Indeed, in some places, without protective dikes some areas of the Isthmus would already be inundated by existing sea levels."

Community leaders from both Sackville and Amherst have said they were eagerly awaiting this study, which will have a budget of $700,000. The mayors of the two towns want defences built against a potential storm surge that could damage their towns.

Meanwhile, climate change anticipated over the next century is increasing the risk to the area.

Federal figures released in April on the rising seas in Atlantic Canada say the scientific consensus predicts 75 centimetres to one metre of relative sea level rise for the East Coast by the end of the century.

The Canadian Press reported in late March on the risk of much of the East Coast being cut off if the key trade corridor is submerged due to a strong tidal surge overtopping dikes -- the majority of which were last upgraded 50 years ago.

The 37-page document issued Monday by the New Brunswick Department of Transportation and Infrastructure -- which is partnering with Nova Scotia and Ottawa -- says the corridor is the main route for all land-based trade and passenger travel between Nova Scotia and New Brunswick and all points west.

The corridor's high-voltage transmission lines are also considered crucial to both provinces. Muskrat Falls hydroelectricity from Labrador will cross the area to reach to its key markets, and Prince Edward Island's trade and tourism is also reliant on the corridor remaining open.

Previous studies have estimated the value of trade passing through the area at $50 million per day, with an average of about 2,490 vehicles using the route daily.

The isthmus has had large dikes since 1671, when Acadian settlers arrived. There are currently about 35 kilometres of dikes helping protect roads, railways, farms and communities.

The document says the successful bidder will be given access to road and railway data, but there is "less information on the structural integrity of the dikes" and aboiteaux -- sluices under the dikes that allow water out at low tide and close when the tide is coming in.