Brace yourselves, winter is coming A pedestrian walks through blizzard-like conditions in Halifax as heavy snow, high winds and pounding surf hit most of Atlantic Canada on Tuesday, March 13, 2018. (THE CANADIAN PRESS/Darren Calabrese)

HALIFAX -- There is a good chance that part of the Maritimes will experience a heavy November snowfall on Friday.

There is an outbreak of very cold Arctic air underway in the Prairie provinces. A deep trough (dip to the south) of the jet stream will allow this cold air to move across Ontario and Quebec and into Atlantic Canada by the end of this week. In the Maritimes we will really begin to experience this chill Thursday night into Friday morning. 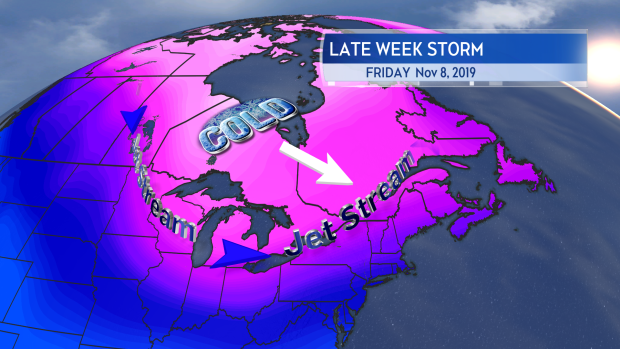 At the same time, a strong low-pressure system will move northward just off the eastern seaboard of the United States. The heavy moisture wrapped up in that storm combines with the cold air to give the Maritimes a chance to see the first significant snowfall of the season.

Now, who will see that snow and how much is still to be determined. As the storm moves past it will have a snowy western side and a rainy eastern side. This means that the exact track (or path) the system takes through the Maritimes will determine the specific impacts to communities in the region. 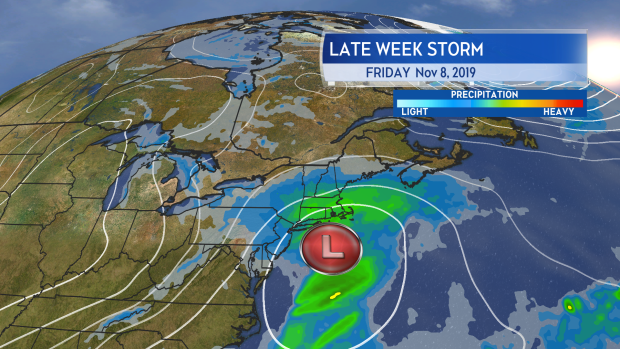 Currently, it looks like a path through the southwest of Nova Scotia or up the Bay of Fundy is most likely. That would bring the highest chance of a heavy snowfall (15 or more centimetres) across central and southern New Brunswick, western P.E.I., and possibly northern Nova Scotia (Cumberland/Colchester Counties). Other parts of the Maritimes would need to watch for a bit of snow to start followed by heavy rain. A shift further west with that track would push the chances of heavy snow into far northern New Brunswick and possibly even Quebec. A shift further to the east could expand the chance of more significant snow further into eastern P.E.I. and Nova Scotia.

Details of the Friday forecast will improve over the next few days. By Wednesday and Thursday, a much clearer picture of snowfall and rainfall amounts, as well as wind strength, will be available. For now, just be sure you are checking in frequently on the forecast for Friday and that you are prepared to adjust your activities during the day to accommodate the weather.

I'll be following and updating the forecast for this system all week here on atlantic.ctvnews.ca and on CTV News at noon, 5, 6, and 11:30 p.m.