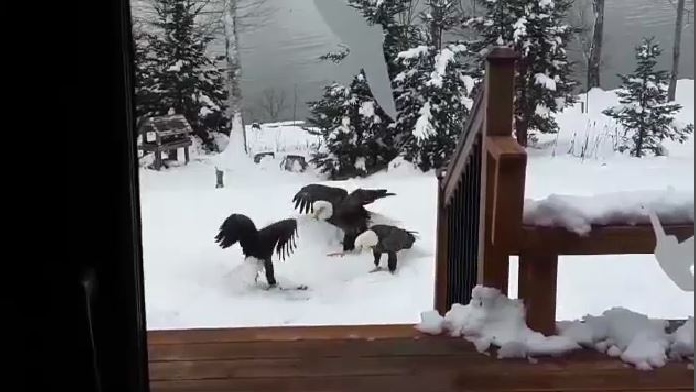 It's not every day you see a single bald eagle up close, which is why one Cape Breton bird watcher is calling her newest video the capture of a lifetime.

HALIFAX -- It's not every day you see a single bald eagle up close, which is why one Cape Breton bird watcher is calling her newest video the capture of a lifetime.

Elaine Burton-Brown normally sees birds visiting her backyard daily, but when she noticed seven bald eagles all at the same time, she was lost for words.

"This is a thrill of a lifetime, that's about it," said Elaine.

The longtime bird watcher took a video of the rare sighting showing seven bald eagles on her property and shared it on social media on Monday.

Just three days later, and Elaine's video had already been viewed over 70,000 times.

"I just had to share it with everybody," said Elaine.

Ok, here is just a wee bit. I'm so hyper of excitement! This was tidbits for crows and ravens here, but eagles decided it was theirs. The decals on windows are for birds no fly. pic.twitter.com/55Z0vXfnE5

Elaine says she's been getting lots of feedback from people all over the world, some telling her they appreciated seeing nature's simple beauty during such a stressful time for everyone.

"Even if it's only for a few seconds, and obviously it worked because a lot of people were so happy to see that and to me, that's great and I'm still getting comments," said Elaine.

For a video seen all over the globe, it couldn't have been shot in a more secluded area. Elaine's property, which sites along the Bras d'Or Lake in Cape Breton, is a bird watchers paradise.

The area Elaine lives in is known to be such a haven for bald eagles that a short path leading to her home is called "Eagle's Way."

"When we moved here, they basically adopted us," explained Elaine.

While she's in a perfect place for bird watching, Elaine has been staying mostly at home for months now due to the ongoing COVID-19 pandemic.

She says that was all the more reason she felt compelled to share her video.

"I'm stuck at home and I'm sure thousands and thousands of people are, and seeing that just takes away all of that. You just feel so free," said Elaine.

As for seeing this many of the majestic birds at once, Elaine knows it is probably a once in a lifetime sighting.

Something she says she will always cherish.

"Beauty. Beauty and nature at her best," said Elaine.