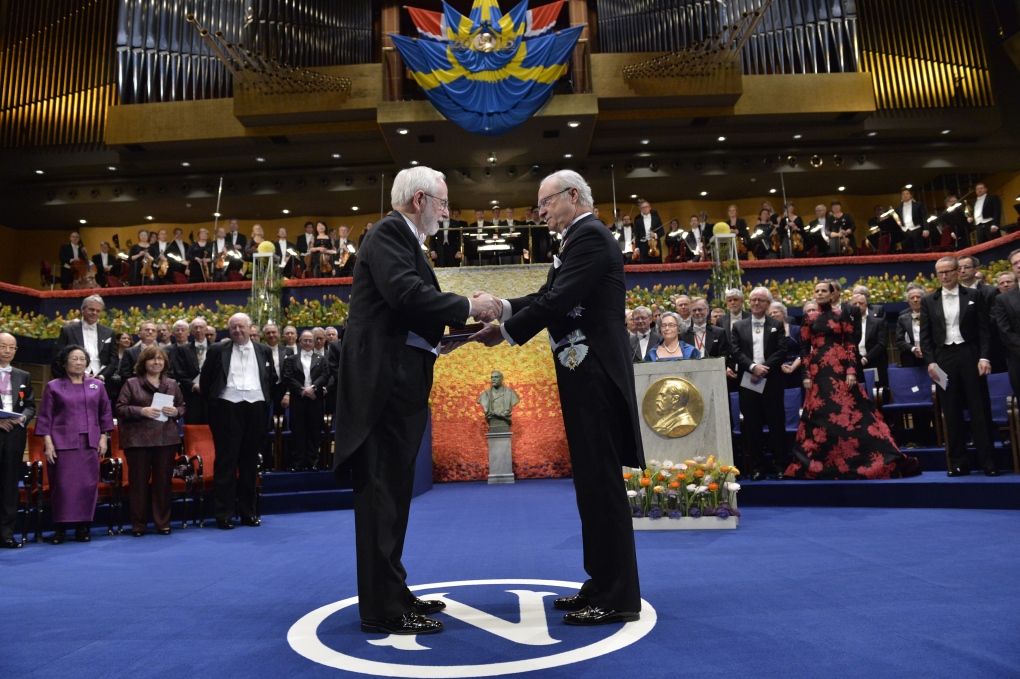 STOCKHOLM -- Canadian scientist Arthur McDonald was formally presented Thursday with his Nobel Prize at a ceremony in Stockholm.

McDonald, a retired professor from Queen's University in Kingston, Ont., was the co-winner in physics for his work on tiny particles known as neutrinos.

"It is a great honour to receive this prize," McDonald said in a statement. "It is wonderful to share it with many of my (Sudbury Neutrino Observatory) colleagues and their partners here in Stockholm and with hundreds more who contributed so much to our success, at Queen's and our other Canadian and international institutions."

McDonald and Japanese scientist Takaaki Kajita were cited for the discovery of neutrino oscillations and their contributions to experiments showing that neutrinos change identities.

They determined that neutrinos have mass, which fundamentally changed the understanding of the laws of physics.

The prizes in medicine, chemistry, literature and the Nobel Memorial Prize in economic sciences are to be handed out later today.

"This is a proud moment for Canadian science and for all Canadians," Trudeau said in a statement.

"The Canadian government values the work of our country's scientific community -- and fully supports it -- by encouraging excellence and respecting scientists' independence. We will ensure that all future decisions on matters that affect Canadians will be informed by scientific evidence."

Earlier, members of the Tunisian National Dialogue Quartet, which helped build democracy in the violence-torn country after the 2011 revolution, collected the Nobel Peace Prize in the Norway's capital on Thursday.

Their award was picked up at a ceremony in Oslo City Hall by members of four organizations, representing unions, industry, trade and human rights.

The quartet is made up of four key groups: The Tunisian General Labor Union; the Tunisian Confederation of Industry, Trade and Handicrafts; the Tunisian Human Rights League; and the Tunisian Order of Lawyers, the country's bar association.

Norwegian Nobel Committee Chairwoman Kaci Kullmann Five cited the group for "its decisive contribution to the building of a pluralistic democracy" following Tunisia's 2011 revolution that overthrew its long-time authoritarian president.

The gold medals and diplomas were picked up by Houcine Abassi, the labour union leader; Mohammed Fadhel Mafoudh, head of the bar association; Abdessatar Ben Moussa, president of the human rights group and Wided Bouchamaoui, the head of the employers' association.

She said the 8 million Swedish kronor ($1.3 million CAD) prize was for the quartet as a whole, not for the four individual organizations.

According to an English translation of the remarks in Arabic, Abassi expressed their sorrow and anger at the "terrorist acts" that had killed and injured hundreds. This year, two major attacks on tourists in Tunisia killed 22 people at the Bardo Museum in the capital, Tunis, and 38 at a resort near Sousse.

He said their "feeling of euphoria and pride does not obscure the grief sorrow and anger" they feel about recent violent events, including "Sousse, the Bardo Museum, Beirut, Paris, Sharm el-Sheikh and Bamako (with) scenes of barbaric and heinous terrorist acts."

--With files from the Associated Press