China's ambassador to Canada hopes for 'achievements' during NAFTA talks 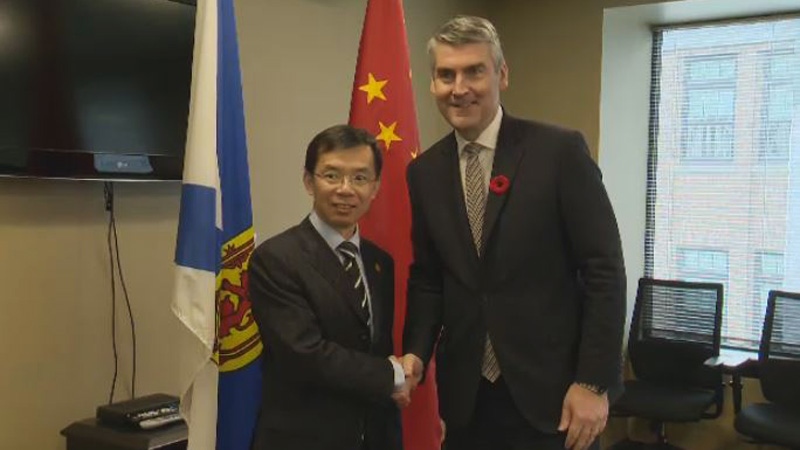 China's ambassador to Canada, Lu Shaye, meets with Nova Scotia Premier Stephen McNeil and his cabinet in Halifax on Nov. 7, 2017.

"NAFTA is very effective to regulate the trade relations between these three countries," Lu said through a translator.

He sidestepped a question about what China was learning about U.S. President Donald Trump's trade approach through the NAFTA talks, saying his country will always seek multilateral trade, "No matter what kind of trade policy the U.S. government adopts.

Still, he said his country recognizes free trade is under a growing threat: "While China will follow this ideology to develop friendly relationships with all the countries in the world, protectionism is rising in some parts of the world."

Prime Minister Justin Trudeau's Liberal government has been seeking deeper trade relations with China despite suggestions the initiative could risk upsetting the Trump administration during the NAFTA renegotiations.

They say rejecting the deal on security grounds would anger China.

Lu was asked Tuesday whether such a move would jeopardize potential trade talks between the two countries.

"We will respect any decision made by the Canadian government in this regard (Aecon)," he said.

The discussions with Premier Stephen McNeil focused on areas such as seafood, education, tourism, and energy, as well as the recent friendship agreements between Nova Scotia and the Chinese provinces of Shandong and Guangdong.

Lu made note that McNeil also made it known that he would like to see a direct air link between China and Halifax. The ambassador said that he would work to "promote and make it happen."

McNeil said getting direct air access would help build the momentum the province has been building in getting its own access to Chinese markets.

"When I was in China the last two times I met with different airlines," he said. "We have a number that would be looking at it and we hope Air Canada does as well."

He said the preferred entry point from the province's perspective would be Guangdong province, where "they consume an awful lot of our seafood product."

China is Nova Scotia's second largest trading partner after the U.S. According to the province, total exports jumped to $495 million in 2016, an increase of 17 per cent from 2015.

McNeil was asked how important a formalized free trade deal with China would be for his province.

"We're a trading province. We're not waiting for a formalized one (deal), we are going in and making a commitment, but the Prime Minister obviously is working hard to achieve that for the country."