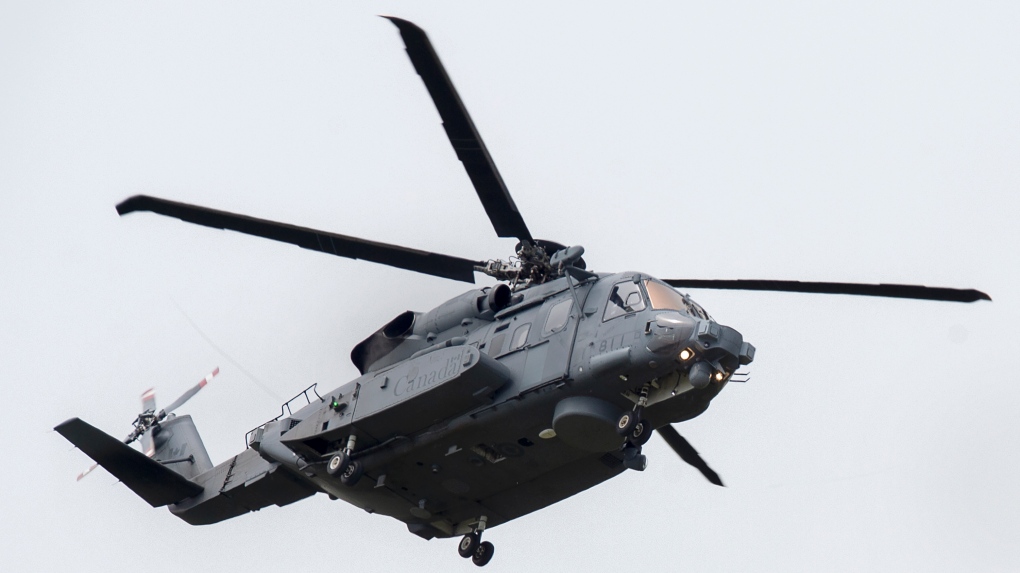 A CH-148 Cyclone helicopter from 12 Wing Shearwater, home of 423 Maritime Helicopter Squadron, flies near the base in Eastern Passage, N.S. on Tuesday, June 23, 2020. (THE CANADIAN PRESS/Andrew Vaughan)
Halifax, N.S. -

Repairs have been completed on one of the Canadian military's 19 Cyclone helicopters recently found with cracks in its tail, the Royal Canadian Air Force confirmed Wednesday.

The Air Force issued a statement saying Sikorsky Aircraft, the U.S.-based manufacturer of the 24 Cyclones delivered to the military, has devised a fix that involves the installation of reinforcements to provide added strength to the helicopter's airframe.

"Repairs are underway for several aircraft, as our engineering and technical experts are working closely with Sikorsky to return the fleet to serviceability," Maj Cynthia Kent said in the statement.

Kent said it will take about two to three days to repair each aircraft, but she did not release any details about the nature of the damage.

"We do not yet have a definitive timeline for the completion of the repairs," Kent said. "We have not seen this issue before with the RCAF CH-148 fleet, and the cause is still under investigation with the manufacturer."

The Air Force has said its fleet of CH-148 Cyclones has not technically been grounded or placed on an operational pause, but Kent confirmed the 19 damaged aircraft were removed from regular flying duties.

Kent dismissed speculation that the cracks could have appeared in aircraft's folding tail mechanism, which is unique to the Cyclone variant of Sikorsky's S-92 civilian helicopter. No cracking was found on the tail's hinge or locking mechanism, she said.

Meanwhile, a spokesman for Sikorsky confirmed Wednesday that the cracks -- first detected on Nov. 26 in a B.C.-based helicopter -- were found in the forward portion of the tail cone, which is the section of the tail closest to the fuselage.

John Dorrian said the cracks do not pose an immediate safety hazard, but he said that could have changed if the damaged helicopters had kept flying without repairs.

"If you continue flying it when it has cracks, it can become (a hazard)," he said in an interview. "The intent is to get the repairs done rapidly to prevent the cracks from getting worse and more expensive to fix."

As well, Dorrian confirmed that there are no cracks in any of the helicopters' "primary structural load components," which refers to the airframe's key load-bearing parts.

"We are working with the RCAF to resolve the issue," he said in an email. "Preliminary analysis suggests this issue is unique to the (Cyclone) airframe configuration."

The cracks were first detected during a routine inspection at 443 Maritime Helicopter Squadron in Patricia Bay, B.C., which has six Cyclones. The entire fleet is overseen by 12 Wing Shearwater, which has 17 helicopters.

One Cyclone crashed off the coast of Greece in April 2020, killing all six military members aboard.

The military said Sunday that two Cyclones did not appear to have any tail defects, and the remaining two in the fleet were receiving longer-term maintenance and will be inspected at a later date.

This report by The Canadian Press was first published Dec. 8, 2021.