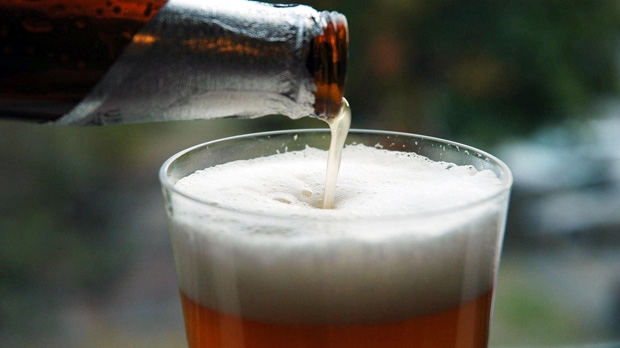 CAMPBELLTON, N.B. -- A New Brunswick man charged with illegally importing alcohol from a Quebec border town isn't alone in making beer runs -- in fact, a private investigator says at least two-thirds of the people he observed buying beer in Pointe-a-la-Croix are from New Brunswick and "it's an everyday occurrence."

John Beckingham was hired by the defence for Gerard Comeau, 62, of Tracadie who is fighting the charge on constitutional grounds.

Beckingham says he made six trips across the J.C. Van Horne bridge into Pointe-a-la-Croix over a two-week period earlier this month, and every time the parking lots were full of New Brunswick vehicles.

"Everyday I went it was the same thing. Business as usual," he told the court Thursday.

He said the Quebec stores were almost completely dedicated to beer sales.

"Ninety per cent of the floor space was for beer. The other 10 per cent was for snacks you'd have while drinking beer," Beckingham said.

He said the beer is sold at about half the price charged in New Brunswick.

Earlier this week, Richard Smith, senior vice-president of the New Brunswick Liquor Corp., said Quebec prices are cheaper because the producers deal directly with the retailers and the government doesn't add a mark-up.

He said in New Brunswick where the sale of liquor must be through NB Liquor outlets, the corporation adds a mark-up of as much as 89.8 per cent to the price it pays the breweries.

"Our mark-ups are consistent with other jurisdictions where governments have mark-ups," he said.

Smith said the Crown corporation makes about $165 million in profits each year for the provincial government to use for such things as the delivery of health care.

Comeau was stopped by police in Campbellton in October 2012 with 14 cases of beer and three bottles of liquor that he had bought in Quebec.

He said the beer was for himself and members of this family.

The beer and liquor was confiscated and Comeau was given a fine of $292.50.

Section 134 of the New Brunswick Liquor Control Act limits anyone from having more than 12 pints of beer not sold by a provincially licensed liquor outlet.

Comeau's defence calls that unconstitutional because Section 121 of the Constitution Act says all goods from a province are to be admitted free into each of the other provinces.

But a Crown witness argued Thursday that Section 121 and other sections of the Canadian Constitution being cited by the defence have gone dormant.

Tom Bateman, a political science professor at St. Thomas University in Fredericton, said no province would consider imposing duties at provincial borders, so Section 121 has fallen into disuse.

Outside the court, Karen Selick of the Canadian Constitution Foundation fired back, saying it's Section 134 of the provincial act that has gone dormant, and was only used during the two days of the police sting operation when Comeau and 16 others were charged.

"If any law has fallen into disuse, surely it is that one and not the Constitution," she said.

New Brunswick Energy Minister Donald Arseneault, who is the member of the legislature for the Campbellton area, said he is glad the issue is before the courts, and the provincial government will review the court decision in due course.

Patrick Oland, the chief financial officer for Moosehead Breweries is scheduled to testify for the Crown Friday morning before the lawyers present their closing arguments to Judge Ronald LeBlanc.