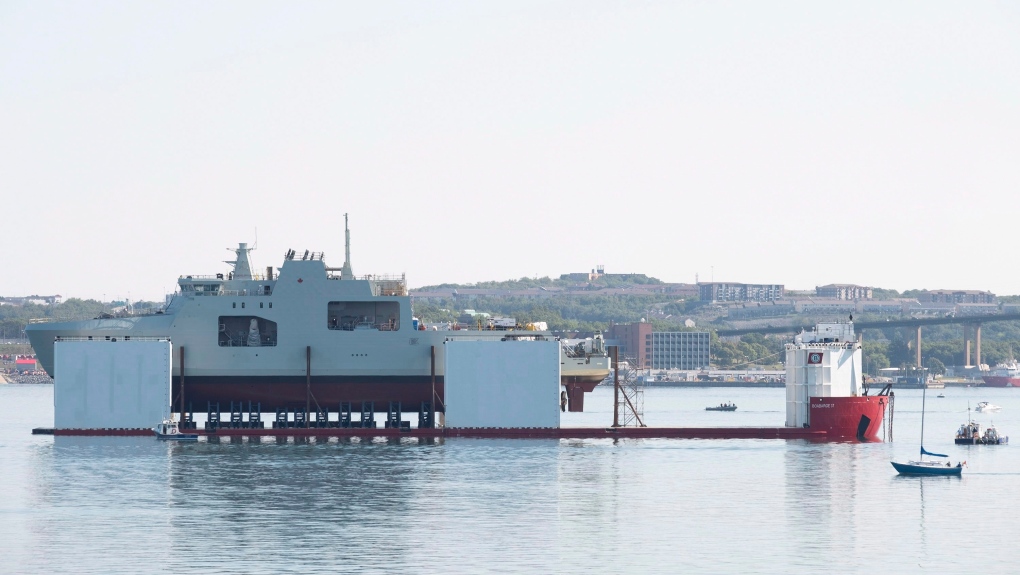 HALIFAX -- The delivery date for the navy's first Arctic and offshore patrol ship has again been pushed back.

Irving Shipbuilding in Halifax was originally scheduled to deliver the ship in 2018, but in August that deadline was pushed to the end of 2019.

On Tuesday, Irving Shipbuilding released a statement saying the new ship, HMCS Harry DeWolf, is expected to be delivered during the first three months of 2020 -- nearly five years after construction first started.

The company says it had always intended to "revisit" the delivery deadline, given the fact it is building a newly designed ship with a new supply chain, a new shipyard and a new and growing workforce.

Irving spokesman Sean Lewis said the ship will be the largest naval vessel built in Canada in more than 50 years.

"We are now just weeks away from taking the future HMCS Harry DeWolf to sea for the first time, followed by formal sea trials and acceptance by our customer," Lewis said in a statement. "This will span into the first quarter of 2020."

Four of the Harry DeWolf-class of vessels, which will be capable of breaking through light ice and armed with a small cannon, are currently under construction in Halifax.

The Arctic patrol vessels are the first vessels to be built by Irving since it was selected as one of two shipyards under the federal government's multibillion-dollar national shipbuilding strategy.

Under the original plan, Irving was to build between six and eight Arctic patrol vessels at a total cost of around $3.1 billion, as well as the navy's new fleet of 15 warships for $24 billion, once those smaller ships were finished.

However, numerous delays and cost overruns saw the number of Arctic patrol vessels cut to five, even as the budget was increased to $3.5 billion. The 15 warships are now projected to cost $60 billion.

In November 2018, Ottawa announced it would pay $800 million for a sixth Arctic vessel as well as to slow production at Irving to prevent layoffs between the end of work on the last Arctic ship and the start of warship work.

Then in May, Prime Minister Justin Trudeau announced plans to spend an additional $15.7 billion on 18 new ships for Canadian Coast Guard, including two additional Arctic patrol vessels from Irving.

The other 16 ships are being built by Seaspan Shipbuilding in Vancouver, which was selected in 2011 as the second yard under the national shipbuilding plan.

-- With files from Lee Berthiaume

This report by The Canadian Press was first published Nov. 12, 2019.