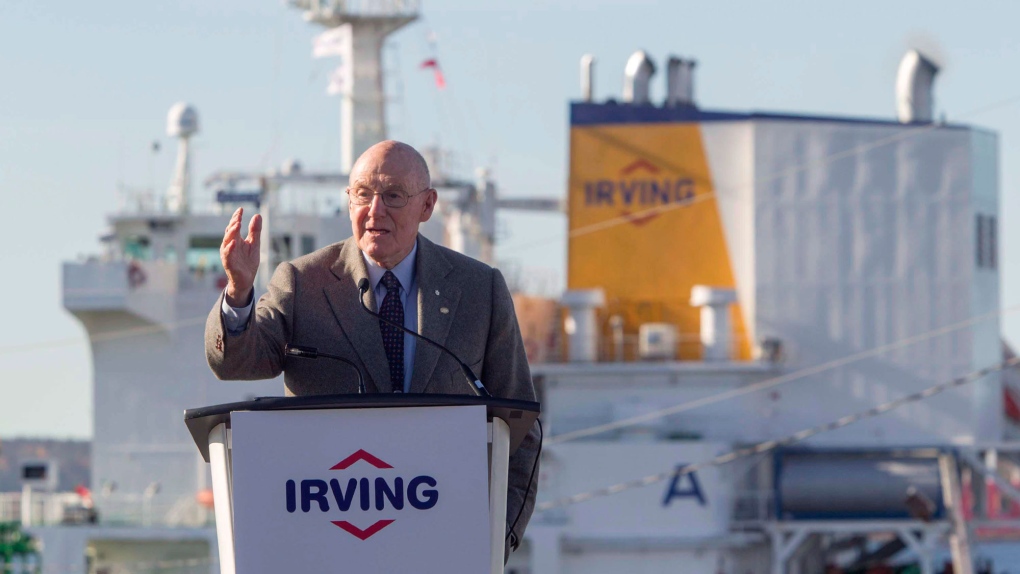 HALIFAX -- The chairman of Irving Oil confidently predicted Thursday the proposed Energy East Pipeline still being examined by federal regulators "will happen," though he thinks the process is taking too long.

Arthur Irving said Thursday that Alberta's struggling economy urgently needs the pipeline to transport its crude oil, and his firm is eager to partner with TransCanada (TSC:TRP) to build a deepwater terminal in the Bay of Fundy.

"That will happen, but it's taking a little longer than it should. But it will happen because it's the right thing to do for Canada. They can't get along without it. Alberta needs it and the East Coast needs it," he said during a speech.

The Saint John, N.B.-based businessman, made his comments while announcing his company's completion of its Halifax harbour terminal -- and as the regulatory process for the pipeline emerges from controversy.

The National Energy Board panel reviewing the proposal was recused last month after it became known publicly that two of the three panellists met last year with former Quebec premier Jean Charest, then a consultant for project proponent TransCanada.

Natural Resources Minister Jim Carr has said appointing new panellists means the review period for the project could be delayed, as could the NEB's goal of having a decision on Energy East by March 18, 2018.

On Thursday, Carr also announced the appointment of four temporary members to the National Energy Board, saying they would travel along the proposed Energy East pipeline route to carry out enhanced community and Indigenous engagement.

Irving said he was recently in Alberta and observed the oil-rich province's economic struggles, saying it needs a way to transport its product to the ocean for export.

"That pipeline will be built because Alberta has to have it. ... Calgary misses the pipeline now," he said.

The 4,500-kilometre pipeline would cost $15.7 billion and carry 1.1 million barrels of oil per day from Alberta to New Brunswick. About two-thirds is already in place as a natural gas pipeline.

Following Irving's comments, the Nova Scotia energy minister also weighed in, saying the province intends to tell senators holding hearings in Halifax on Friday that the project is a good one for Atlantic Canada.

"I'll be making a presentation to the Senate committee ... to indicate our premier and our government support the Energy East Pipeline and see it as part of our energy security here in Nova Scotia," said Michel Samson.

However, Stephen Thomas, energy campaign co-ordinator with the Halifax-based Ecology Action Centre, said it's a bit early to be declaring victory for the proposal.

"We think it's inappropriate that a proponent in an ongoing regulatory process will make a prediction about how it's going to go. That's quite telling about the process itself," he said in a telephone interview.

Thomas said the pipeline is strongly opposed by over 300 Quebec municipalities, the assembly of First Nations of Quebec and Labrador, a Treaty Alliance of over 50 First Nations across Canada, and many local businesses, fishermen and people who live along the shore of the Bay of Fundy.

"The bitumen in this pipeline ... is set to be exported raw through the Bay of Fundy. With little gain for Atlantic Canadians, this pipeline and export project simply isn't worth the risk," he wrote in an email.

Irving said his company is committed to promoting the Atlantic Canadian economy, citing the firm's $80 million investment in the Halifax terminal facility as an example.

Last year, the firm announced it would reactivate the facility, enabling the storage and distribution of gasoline, diesel, home heating oil, marine transportation fuel and jet fuel for customers in Nova Scotia.

At the time, delays in tanker arrivals at the nearby Imperial Oil terminal resulted in a three-day shortage in the province.