Ex-soldier who killed his family in N.S. knew what he did was morally wrong: doctor 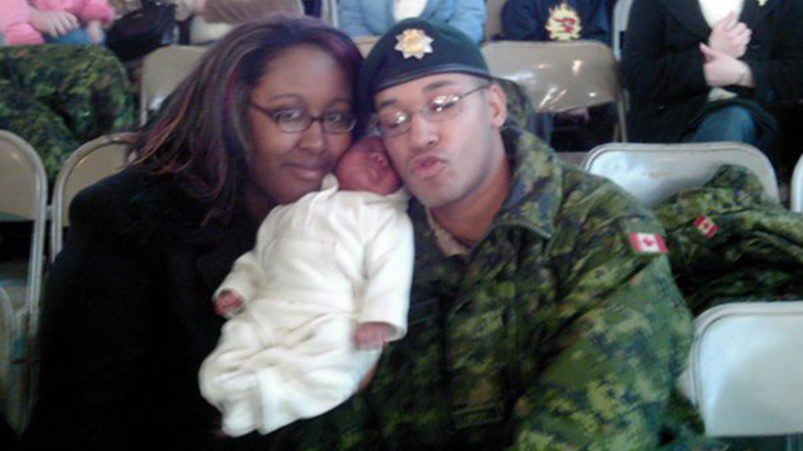 Shanna and Lionel Desmond hold their daughter Aaliyah in a photo from the Facebook page of Shanna Desmond. (THE CANADIAN PRESS / HO - Facebook)
PORT HAWKESBURY, N.S. -

An Afghanistan war veteran was suffering from several mental disorders when he killed three family members and himself in 2017, but he understood his actions were wrong, an inquiry in Nova Scotia heard Tuesday.

Dr. Scott Theriault, a forensic psychiatrist with 30 years of experience, testified that Lionel Desmond was not suffering from delusions or a brief flashback when he fatally shot his wife, mother and 10-year-old daughter in their rural home in Big Tracadie, N.S.

As well, Theriault said the former infantryman was not suffering from a dissociative episode, which involves a prolonged break from reality that is typically associated with a traumatic event.

The provincial fatality inquiry has heard Desmond served in Afghanistan in 2007 and was later diagnosed with severe post-traumatic stress disorder, major depression, a borderline personality disorder and borderline delusions about his wife's fidelity.

"I think Mr. Desmond was a reasonably intelligent individual," said Theriault, who was mandated by the inquiry to conduct a psychological autopsy on Desmond. "In the actions that he undertook, he would have been aware that those actions were morally and legally wrong."

Theriault's testimony is important because the inquiry has heard testimony from another psychiatrist who confirmed Desmond had suffered from dissociative episodes that left him believing he was reliving the violent events he experienced in Afghanistan. And some of Desmond's relatives have said that after he was medically released from the military in 2015 and returned home to Nova Scotia, he would sometimes suffer from debilitating combat flashbacks.

"At dances, he would be spinning on the floor and thinking he was still in combat," his sister, Chantal, said in an interview in June 2017. "Anything could set him off. He would wake up in cold sweats. He would back into corners, have his back against the wall."

Theriault, however, said there was no evidence that Desmond had experienced real delusions, which involve a total break with reality.

As well, he said the inquiry's records show that the former rifleman experienced very few dissociative events. The psychiatrist mentioned evidence indicating Desmond had once dreamt he was back in Afghanistan and awoke to realize he was choking his wife, for which he apologized.

"The information that we have about any dissociative phenomenon is relatively brief," Theriault said.

"But there's no evidence that I have that would suggest that a dissociative event would be as protracted as this particular (homicidal) behaviour that he ultimately engaged in (on Jan. 3, 2017)."

Lawyer Adam Rodgers, who represents Desmond's estate, noted that two other medical witnesses had also described dissociative episodes Desmond had experienced. The lawyer raised the possibility that Desmond's decision to buy a rifle with a scope and to change into camouflaged clothing just before the killings could point to a dissociative event.

"We have information that on Jan. 3, he had several conversations with several people over a period of time, where he presented as organized, polite and controlled," Theriault said.

"My expectation would be that for an individual in a dissociative state, who is functioning as though they are in a war zone, that level of calm demeanour would not be present."

Had Desmond survived the shootings, Theriault said, he would not have been able absolve himself of criminal responsibility.

Under the Criminal Code, an accused can be declared not criminally responsible if their mental disorder renders them either incapable of appreciating the nature of their actions or unable to understand that their actions were wrong.

This report by The Canadian Press was first published Nov. 2, 2021.