Island-born, Halifax-based artist Rose Cousins captured the coveted Album of the Year for her melancholic heartbreak record "Natural Conclusion," and also won Song of the Year for "Grace."

The ever-popular, hat-donning rocker Matt Minglewood of Cape Breton won the Fans' Choice Entertainer of the Year, while Halifax rapper Quake Matthews took home Rap/Hip Hop Recording of the Year for his album "Celebrate the Struggle."

Sloan, one of Halifax's most acclaimed alternative rock exports, received an honorary award and performed at the gala event in downtown Halifax.

KINLEY's song "Microphone" -- which she performed on Thursday wearing a flowing, colourful dress -- paints a picture of a boy taking the hand of a girl and leading her to a field, where she was sexually assaulted despite repeatedly saying no.

"That guy that I wrote the song about, I hope you're watching," KINLEY, whose full name is Kinley Dowling, told an enthusiastic crowd in accepting the award for Fan Choice Video of the Year.

KINLEY said she's honoured to be a voice of the .MeToo movement.

"This conversation is so important right now, and I'm so happy to be a tiny part of it ... and make a little bit of a difference," said Dowling backstage.

Work is underway to include the music video for "Microphone" in P.E.I.'s Grade 9 health curriculum about sexual assault.

Cousins has said her album "Natural Conclusion" came from a place of vulnerability.

In accepting her Album of the Year award, Cousins said: "I'm so proud of this record."

"My stuff is dark. I guess we all need a soundtrack to go through the hard times, too, so I'm happy to provide that," she said, going on to thank her producer Joe Henry, among others.

Ryan Freeland and Joao Carvalho's engineering work on Cousins' record was nominated for a Grammy alongside albums by Bruno Mars and Roger Waters in the category of best engineered album (non-classical), although the award ultimately went to the engineers of Mars' "24K Magic."

More East Coast Music Awards will be handed out over the course of the weekend as the festival continues in Halifax.

The East Coast Music Association is a regional collaboration of people in the music industry to foster, develop and celebrate East Coast music and its artists.

The following awards were handed out Thursday night at the East Coast Music Awards:

Album of the Year: "Natural Conclusion" by Rose Cousins

Song of the Year: "Grace" by Rose Cousins

Fans' Choice Video of the Year: "Microphone" by KINLEY

Pop Recording of the Year: "Paradise" by Jenn Grant

Songwriter of the Year: Joel Plaskett

Group Recording of the Year: "Carte noire" by Les Paiens

Rap/Hip Hop Recording of the Year: "Celebrate the Struggle" by Quake Matthews 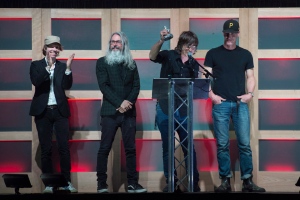