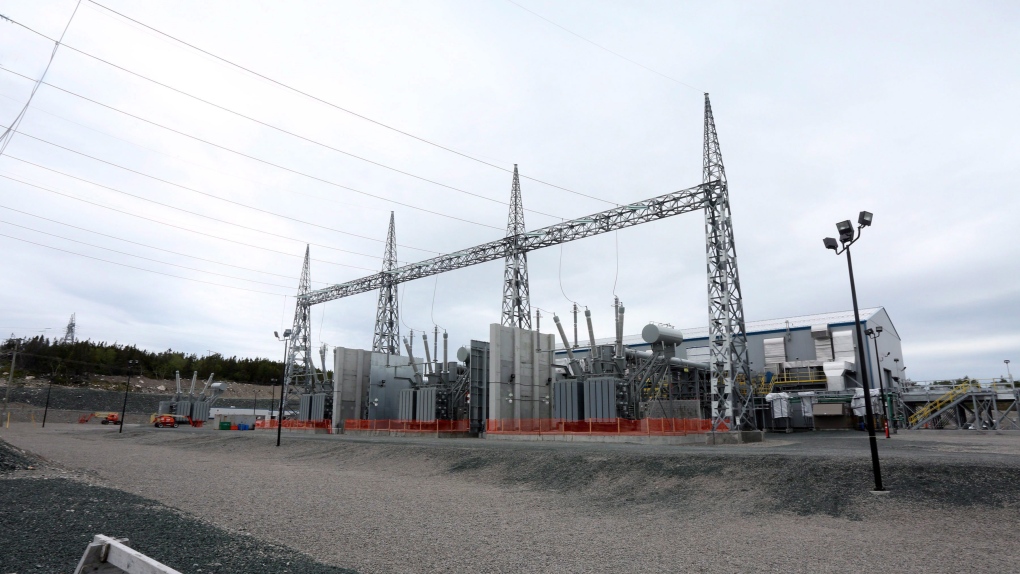 The Nalcor Energy Lower Churchill Project Soldiers Pond site, pictured on Wednesday June 27, 2018, is about 40 minutes outside of St. John's and is essential to deliver power from Muskrat Falls to the island of Newfoundland. (THE CANADIAN PRESS/Paul Daly)

ST. JOHN'S, N.L. -- Newfoundland and Labrador's Crown energy corporation reported a pandemic-related profit loss from the first quarter of 2020 on Tuesday, along with further complications to the beleaguered Muskrat Falls hydroelectric project.

Nalcor Energy recorded a profit loss of $171 million in the first quarter of 2020, down from a $92 million profit in the same period last year, due in part to falling oil prices during the COVID-19 pandemic.

The company released its financial statements for 2019 and the first quarter of 2020 on Tuesday, and officials discussed the numbers in a livestreamed presentation that detailed the impact of the global health crisis on the company's operations.

The loss in the first quarter was caused by lower profits from electricity sales and a drop in oil prices due to the pandemic and other global events, company officials said.

Work at the remote site stopped in March over concerns about spreading the virus. Operations have been resuming slowly, with a reduced workforce tackling the remaining jobs.

Officials with Nalcor said it will likely be another year before the megaproject is complete.

CEO Stan Marshall estimates the months of delays could bring the total cost to $13.1 billion including financing, up from the previous estimate of $12.7 billion -- though the total impact of the coronavirus on the project's price tag has yet to be determined.

"If we're going to shut down again, all of that's wrong," Marshall said. "But otherwise, we can just carry on and we'll have a good idea of the productivity level. I'm hoping that by September we'll have a more definitive number here."

It has seen costs essentially double since it was approved in 2012, and faced significant delays even before pandemic-forced shutdowns in North America and around the world this spring.

Cost and schedule overruns were the subject of a sweeping inquiry that held hearings last year.

The commissioner's report faulted previous governments for failing to protect residents by proceeding with the project no matter what, and for placing trust in Nalcor executives who "frequently" concealed information about schedule, cost and related risks.

Some of the latest delays have come from challenges with the development of software required to run the transmission link between Labrador and Newfoundland.

The software is still being worked out, Marshall said Tuesday, and the four units at the dam will come online gradually over the next year.

"It's not an all or nothing thing," Marshall said of the final work stages.

Nalcor's financial snapshot follows a bleak fiscal update from the province this month. The Liberal government reported a net debt of $14.2 billion and a deficit of more than $1.1 billion, citing challenges from pandemic-related closures and oil production shutdowns.

Finance Minister Tom Osborne said at the time that help from Ottawa will be necessary to get the province's finances back on track.

Muskrat Falls represents about one-third of the province's debt, and is set to produce more power than the province of about half a million people requires. Anticipated rate increases due to the ballooning costs have posed a significant political challenge for the provincial government.

Ottawa has agreed to work with Newfoundland and Labrador on a rewrite of the project's financial structure, scrapping the format agreed upon in past federal-provincial loan agreements in order to ease the burden on ratepayers.

Marshall, a former Fortis CEO who was brought in to lead Nalcor in 2016, has called the project a "boondoggle" and committed to seeing it completed within four years. Though that plan has been disrupted by the pandemic, Marshall said the end is in sight.

"I'm looking forward to a year from now. And I hope to be gone," Marshall said.

This report by The Canadian Press was first published June 30, 2020.