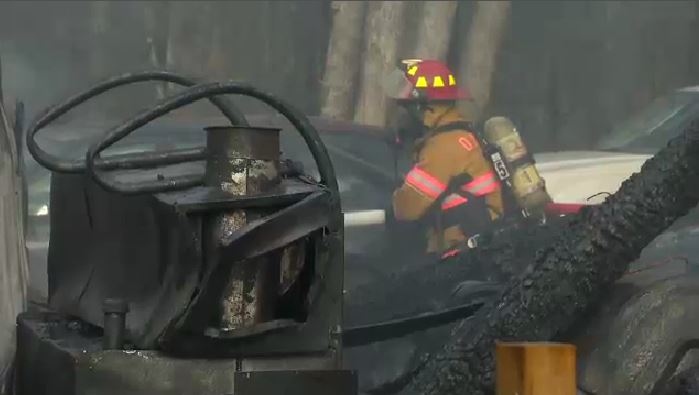 Firefighters from a dozen area departments have extinguished a fire that has reduced a building belonging to a business in Hebbville, N.S. to charred rubble. (CTV ATLANTIC / CARL POMEROY)

HALIFAX -- Firefighters from a dozen area departments have extinguished a fire that has reduced a building belonging to a business in Hebbville, N.S. to charred rubble.

Capt. Arthur Brown of the Hebbville Volunteer Fire Department has told CTV News an alarm came in at 12:42 p.m. on Tuesday, alerting the department of a fire at a building at McCarthy’s Towing and Recovery Ltd. on Nova Scotia Trunk 3.

"There were several explosions," said Dennis Hynes, the chief of the Hebbville Fire Department. "It is an automotive service centre, so there is acetylene tanks, and everything, welding equipment, so of course them tanks, once they get heated, they’re going to pop."

Hynes says that the building was fully engulfed when firefighters arrived and that the fire was so intense that it melted the siding of a nearby home.

Video from the scene shows the building is destroyed. The cause of the fire is under investigation.

Fire at McCarthy's Towing & Recovery,Hebbville, NS, is now out. 12 departments helped with knocking the blaze down. No injuries.@CTVAtlantic pic.twitter.com/Acb3kWXVol

Noon fire at McCarthy's Towing & Recovery, Hebbville, NS., has destroyed garage and some vehicles. Multiple fire stations are still on scene. Fire is knocked down except for hotspots. No word on injuries. @CTVAtlantic pic.twitter.com/cSvIvFncFj