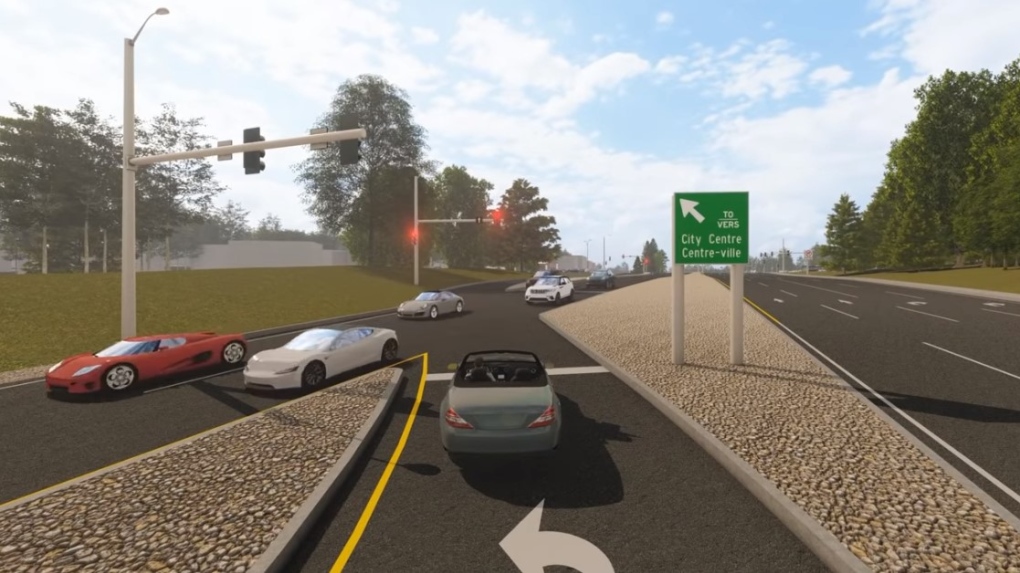 The still image was taken from an instructional video, which shows drivers how to navigate a displaced left turn lane in Charlottetown. (Prince Edward Island government/YouTube)

CHARLOTTETOWN -- Worried there will be confusion when a new type of intersection is completed in Charlottetown, the P.E.I. government has produced no less than 11 instructional videos for drivers.

Described as a first in Canada, the busy intersection near Hillsborough Park will soon feature two so-called displaced left turn lanes on the Trans-Canada Highway.

The strangely hypnotic videos, produced with highly detailed computer animation, show every conceivable option for drivers approaching the redesigned roadways, which include new restrictions on turning right on a red light.

Stephen Yeo, chief engineer for the province's Transportation Department, says the new lanes are designed to ease congestion at a junction that handles about 45,000 vehicles daily during the tourist season.

Yeo says under the current configuration, motorists turning left from the Trans-Canada Highway can sometimes wait up to 20 minutes to complete the manoeuvre onto St. Peters Road.

He says the new intersection is expected to open to traffic as early as Nov. 15.

This report by The Canadian Press was first published Nov. 6, 2020